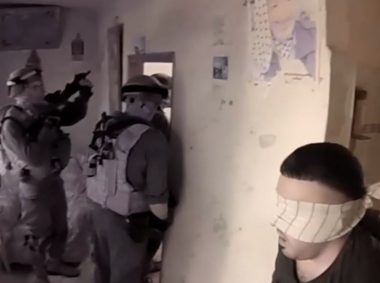 The Palestinian Prisoners’ Society (PPS) has reported that Israeli soldiers abducted, on Monday at dawn, fourteen Palestinians, including a former political prisoner who was imprisoned for 15 years, in several parts of the occupied West Bank.

The PPS office in Nablus, in northern West Bank, said the soldiers invaded the al-Ein neighborhood and Younis Street, on the western entrances of the city, searched homes and abducted Wafa Damouni, a former political prisoner, who was detained for 15 years.

It is worth mentioning that Wafa is the nephew of Jamail Salim Damouni, who was assassinated by Israeli soldiers in 2001.

In related news, the soldiers invaded the home of Osama Herzallah, in Nablus, and injured two young men with rubber-coated bullets during protests against the invasion.

Furthermore, the soldiers abducted Zakariya al-Bakri and Abdullah Najeeb, from their homes in the Old City of Nablus.

In Ramallah, in central West Bank, the soldiers abducted Mohammad Hasan Oleyyan, from his home in the al-Jalazoun refugee camp, after invading it along with many other homes owned by members of Oleyyan, Makhlouf and Awwad families.

In addition, the soldiers invaded the home of Aahed Alqam in Shu’fat refugee camp, north of occupied East Jerusalem, and abducted his sons Othman and Mahmoud, in addition to Yazan Arar, who was also taken prisoner from his home.

In Bethlehem, the soldiers abducted Ibrahim Hasan Salah, 22, from his home in the al-Khader town, south of Bethlehem, in addition to Mahmoud Salem Atallah, from Harmala village, east of the city.