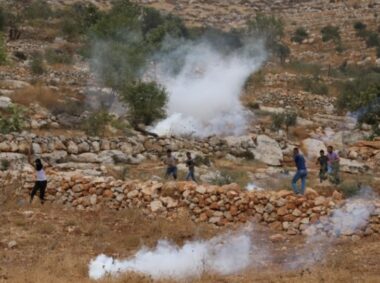 On Friday, Israeli soldiers shot a young Palestinian man and caused many to suffer the effects of tear gas inhalation in Beit Dajan, east of Nablus, in the northern part of the occupied West Bank.

Dozens of Palestinians marched in Beit and Beit Dajan, protesting the escalating Israeli violations and the illegal colonialist activities before the soldiers attacked them with live rounds, rubber-coated steel bullets, gas bombs, and concussion grenades.

Medical sources said the soldiers shot one Palestinian with a rubber-coated steel bullet in Beit Dajan and caused many to suffer the effects of tear gas inhalation.

Also Friday, the Palestinian Health Ministry has confirmed the death of a second Palestinian who was seriously injured after the soldiers killed a Palestinian man in his car.