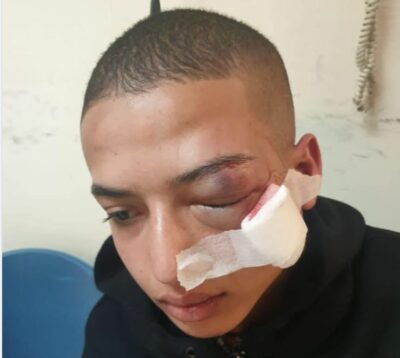 Israeli soldiers invaded, on Sunday evening, the al-‘Isawiya town, in occupied East Jerusalem, and attacked residents protesting the invasion, before shooting one teen, and causing many residents to suffer the effects of teargas inhalation.

The Wadi Hilweh Information Center in Silwan (Silwanic) sources in the town said the soldiers shot Omar Ahmad Mahmoud, 18, with a rubber-coated steel bullet in his face, below his left eye, while he was standing in front of his home.

Silwanic added that Omar received treatment by local medics before he was rushed to Hadassah Israeli Medical Center in Jerusalem.

The incident took place when the soldiers invaded the town to stop the Palestinians from celebrating the release of a detainee, and started firing gas bombs and concussion grenades at random to force the Palestinians to disperse.

The soldiers also installed a military roadblock near the local al-Arba’in Mosque, in the center of the town, before stopping and searching dozens of cars, and interrogated many Palestinians while inspecting their ID cards.

It is worth mentioning that the soldiers also stormed and ransacked the home of Sheikh Rafat Najib, before abducting him.

Najib was interrogated at the al-Qashla center for several hours before he was released.