Israel To Approve 9000 Units In Illegal Colony, North Of Jerusalem 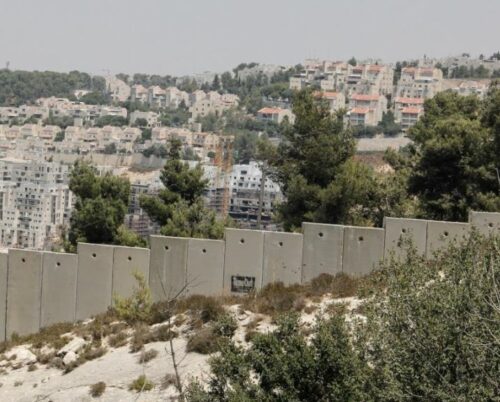 The Israeli so-called “Planning and Construction Committee” of the City Council in occupied Jerusalem is set to approve 9000 new units in Atarot illegal colony, north of Jerusalem, after it authorized four projects in illegal colonies in the occupied West Bank.

Israeli sources said the Committee has started the needed paperwork for approving 9000 new units in Atarot, and added that the units would be built on 6000 dunams of land which were originally part of the Palestinian Qalandia Airport that was destroyed by Israel.

The lands where the airport once stood were illegally confiscated by Israel in the early 1970s.

It is worth mentioning that the Israeli expansion plans for the illegal settlement of Atarot were first advanced several years ago, and Israel had to freeze them on several occasions due to international pressure, including the administration of former US President, Barack Obama.

It is worth mentioning that Israel first started pushing the construction plans back in February of this year, with the aim of cutting the geographical contiguity of various Palestinian urban areas in the occupied West Bank, extending from the Palestinian areas of Shu’fat, Beit Hanina and Kafr Aqab, north of occupied East Jerusalem,  to Qalandia and Ramallah on the Palestinian side of the illegal Annexation Wall.

It added that the approval came after Netanyahu met with US Secretary of State Mike Pompeo several days ago.

The meeting was described as a serious development in advancing the Atarot plan, despite objections from the European Union.

Kan stated that President-elect Joe Biden will likely reject the plan, therefore, Netanyahu is now working on getting US official approval before Trump leaves office.

This includes, according to Israel media sources, Modi’in Illit bypass road #446, a new road between Adam colony and Hizma, in addition to the expansion of Qalandia Terminal.

Regev also announced dedicating 400 Million Israeli Shekels to advance transportation in the colonies, and just a month ago, she presented a new plans to establish a new transportation network that would link Israel’s illegal colonies in the occupied West Bank in the future.

It is worth mentioning that Qalandia Airport, the oldest in Palestine, was first established in the year 1920, during the British Mandate of Palestine, and occupied 650 Dunams of Palestinian lands,

The airport continued to be used after Israel occupied the West Bank, including Jerusalem, in the year 1967, and was dedicated for commerce and tourism in Jerusalem, before it was shut down, and destroyed by Israel in the year 2000.

Qalandia Airport was also supposed to be used by the Palestinians who would travel to Gaza and from there, to other countries via Gaza International Airport, which was destroyed by Israel in the early 2000s.

All of Israel’s colonies in the occupied West Bank, including those in and around occupied East Jerusalem, are illegal under International Law, the Fourth Geneva Convention and all related United Nations and Security Council resolutions.