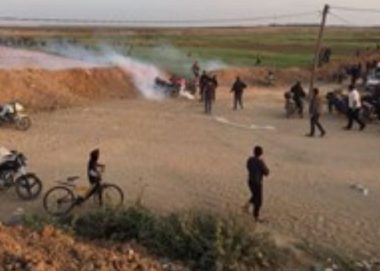 The soldiers repeatedly opened fire at dozens of Palestinians, who marched east of the Zeitoun neighborhood, southeast of Gaza city, wounding three of them.

The three Palestinians suffered moderate wounds, and were rushed to the Shifa Medical center, in Gaza city.

The soldiers also shot two other Palestinian with gas bombs, which directly struck them, near Khuza’a village, east of the southern Gaza Strip city of Khan Younis, causing moderate wounds, before they were rushed to Nasser Hospital.

The Israeli military pushed hundreds of soldiers along the border fence in the besieged Gaza Strip, in placed sand hills, in preparation of mass processions on Friday, which also marks the Palestinian Land Day.

Thousands of soldiers were also deployed in and around occupied East Jerusalem, and in various parts of the occupied West Bank.

The Israeli ministerial cabinet held a special meeting Wednesday to discuss the expected protests. “The Cabinet decided to significantly increase military deployments, in addition to using live fire and shoot to kill orders ‘if the Palestinians breach (or approach) the security fence.’” Israeli forces have frequently killed and injured people taking part in unarmed protests.