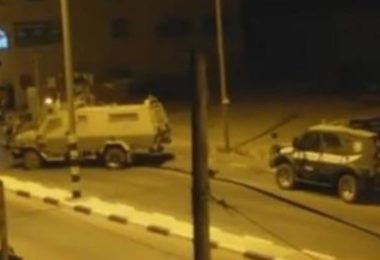 On Monday before dawn, Israeli forces invaded various parts of the West Bank and abducted 17 Palestinians, including a University professor. They also issued summons for 2 Palestinian journalists to report to the Israeli military base near Ramallah for interrogation on Monday.

In Hebron, in the southern part of the West Bank, Israeli forces invaded the home of Hebron University lecturer Huthayfa Jabari, 31, and abducted him.

In the central West Bank, Israeli troops invaded the village of Ni’lin, west of Ramallah, a town known as a center of non-violent resistance to the Israeli occupation, at 4 am. There, they abducted five Palestinian residents, including two former prisoners.

According to local sources, the troops surrounded several houses during their pre-dawn invasion. When the families took some time to open the doors, the soldiers smashed the doors open and ransacked the contents of the homes. The troops also temporarily detained dozens of youths who had come outside during the invasion. The soldiers interrogated the kids and told them that if their weekly non-violent protests continue, they will all be abducted and taken to the Israeli military base.

The weekly protests have been going on since the beginning of this year, and are focused on stopping the Israeli colonial settlement construction encroaching on the town’s lands.

The youths call their weekly protests ‘Night Confusion’, which take place at night and last until dawn. The youth use various means, such as igniting rubber tires, to disturb the settlers and confuse the Israeli army. The Israeli military frequently fires less-lethal and lethal ammunition at the protesters.

Tensions have been running high in the town in the recent months following the demolition of 300 dunams of the village lands at the site of al-Alem Mount (Jabal al-Alem) for the construction of a new illegal colonial settlement outpost.

Also in the Ramallah district, Israeli forces rounded up four others, including a father and his two sons, from al-Jalazonerefugee camp, north of Ramallah city, in central West Bank.

In the Ramallah district, the Israeli intelligence agency, Shin Bet, issued orders to two Palestinian journalists to come to the Ofer military base for interrogation.

According to local sources, journalist Bushra at-Taweel, a resident of Bireh, received a summons ordering her to go to the Ofer base on Monday for questioning. She had recently been released from prison after serving 11 months in so-called administrative detention, with no trial or indictment.

The Shin Bet also summoned journalist Alaa al-Rimawi, resident of Ramallah, who had also been recently released from prison after having been held for one and a half months in ‘administrative detention’ with no charges or trial.