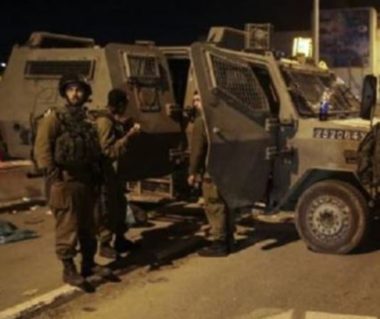 Israeli troops abducted, on Monday, several Palestinian residents, across the West Bank and the internationally-recognized occupied Jerusalem, in continuation of widespread Israeli military crackdown on the Palestinian population.

In occupied East Jerusalem, Israeli troops invaded the al-‘Isawiya neighborhood, local sources reported. This is a neighborhood in East Jerusalem that has been targeted by the Israeli government for colonization, and the Palestinian residents have suffered tremendously over the past several years as a result.

The sources said that the invasion resulted in the Israeli abduction of two teens, Essam Atiya and Mohammad Eid.

In the northern West Bank city of Jenin, Israeli troops broke into the homes of brothers Ahmad and Mohammad Alsheikh, and Waseem Nazzal. Forces invaded and ransacked the two homes, before they abducted the three Palestinian youths.

Meanwhile, Israeli troops in the southern West Bank city of Bethlehem, abducted Ali Abu Serour, 25 and Mohammad Taqatqa, 27, after the soldiers broke into their homes. Local sources said that the troops invaded the Wad Rahal and Beit Fujjar villages, south of the city, where the two abducted Palestinians live.

In the meantime, Israeli troops broke into the home of Palestinian ex-prisoner, Osama Taqatqa in Beit Fujjar village, and vandalized the home. No casualties or abductions, were reported.

In another abduction operation, carried out by Israeli forces, six other Palestinian residents were abducted in Ramallah city. Four of those abducted were identified as Mamdouh Alramhy, Mo’ath Alramhy, Ahmad Zaid and Mohammad Zaid, all residents of the Al-Jalazoun refugee camp, outside of Ramallah city.

In Kobar village, on the northern outskirts of Ramallah city, Israeli troops abducted Basel Al-Barghouthi. Another Palestinian resident, Mohammad Abu Daher of Abushkhaidem, north of Ramallah, was also abducted by the military.

In Tubas city, Israeli troops abducted three other residents after having invaded the Tayaseer village, east of the city. Local sources identified those abducted as Iyad Abu Mohsen, Daham Dabak, and Zahi Abuali.

The sources noted that the Israeli troops broke into and vandalized their homes, before they abducted and took them to unknown destinations.

Over the past several weeks, Israeli troops have stepped up their abduction operations, across the West Bank and the occupied East Jerusalem, with Israeli leaders having announced their intention to take full control over the West Bank and annex large swaths in north of the region.

The Palestinian leadership, residents and political factions have vehemently rejected the expropriation plan and warned against it as a recipe for undermining the chances for peace in Palestine-Israel.