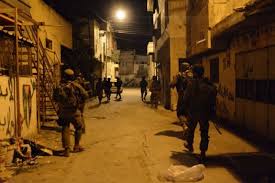 In the northern part of the West Bank, in the Jenin province, Israeli forces abducted three Palestinians, all of whom are former prisoners: Mohammed Ali Ateeq, Muhtadi Jamil Al-Assi and Mohammed Farouk Abed.

In a separate raid in the early morning hours of Tuesday into Jericho, in the southeastern West Bank, Israeli forces abducted Haitham Awwad Jarahid and Marwan Awad Jarahid,

Tareq al-Amouri was taken from his bed while sleeping, from the town of Al-Eizariya in Jerusalem.

These night raids take place on a daily basis, and consist of large contingents of Israeli forces invading Palestinian areas and raiding Palestinian family homes in order to abduct certain members they want to bring in for questioning, or to hold without charges under “administrative detention” for six month periods.