Israeli Troops Abduct Many Palestinians Across the West Bank 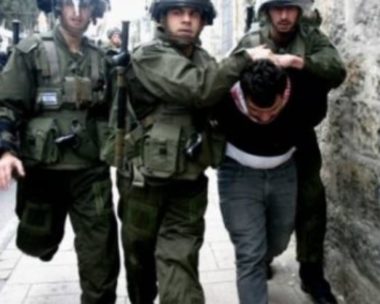 In Bethlehem city, Israeli soldiers, backed by armored vehicles, abducted Abdelrahman Shaibat, after breaking into and vandalizing his home, located in the Beit Sahour area, on the outskirts of Bethlehem.

Sources within the Tulkarem-based Palestinian Prisoners’ Society (PPS), confirmed that the troops abducted Yehya Qarout, 21, from the Ektaba eastern neighborhood of Tulkarem, Aws Hussary, 22, from the Thennaba locality, east of the city and Monjed Redwan, 22, from the Tulkarem refugee camp. All were reportedly abducted by Israeli soldiers after the latter broke into and vandalized their homes.

Israeli abductions of Palestinians in the Israeli-occupied Palestinian West Bank, have recently increased as Israeli leaders have hinted at the possibility of annexing the West Bank by July of this summer.

Summary of those detained;

The PPS Israeli army also delivered summons to three citizens from the town of Al-Jiftlik, Jericho District, to be interviewed with Israeli intelligence.

23. Doaa Ramadan Arafat, 21, a young female student at the University of Palestine, was arrested from Za’tara checkpoint,
24. Muhammad Mahmoud Jamous, 24, from Tulkarem,
25. Muhammad Musa Darwish, 65, from Al-‘Isawiya town in Jerusalem