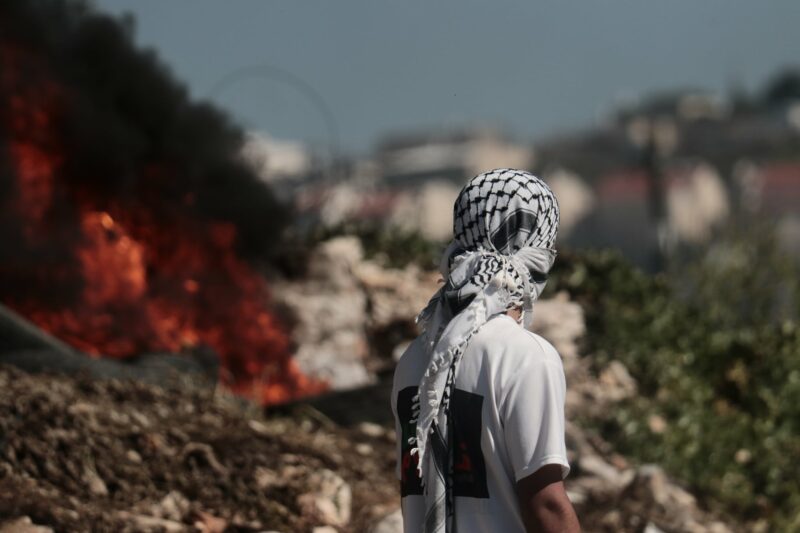 The residents of the village of Kufur Qaddoum, near Qalqilia in the northern West Bank, held their weekly protest against the Israeli Wall and colonial settlements constructed on village land on Friday. Israeli troops attacked the protesters with less-lethal weaponry, hitting a 10-year old child in the chest with a sponge-tipped bullet.

Dozens of other local residents suffered from the effects of tear gas inhalation and were treated at the scene.

According to the local coordinator of the Committee Against the Wall and Settlements, Morad Eshteiwi, Israeli troops invaded the village and began firing their weapons toward the non-violent rally. A soldier shot a sponge-tipped bullet toward a ten-year old child, hitting him in the chest.

The child, 10-year old Mahmoud Bashar Ishteiwi, was taken by ambulance to Rafidia Hospital in Nablus. He was treated for his injuries and released later the same day, according to local sources.

The focus of Friday’s rally was calling for re-opening the main entrance of the town, which Israeli authorities have kept closed for years, virtually imprisoning the residents of Kufur Qaddoum. In addition, participants in the march marked the anniversary of the Hebron Massacre on February 25th, 1994, when American-born doctor Baruch Goldstein opened fire into the Ibrahimi Mosque in Hebron, killing 29 women, men and children who were praying there, and wounding 125.

The march began after Friday prayers from the square of the Omar bin Al-Khattab Mosque in Kufur Qaddoum, and included a large segment of the population of the village. They marched to the closed entrance to the village and chanted slogans calling for an end to the Israeli military occupation of their land and property.

The village of Kufur Qaddoum has engaged in weekly non-violent protests against the Wall and colonial settlements each Friday afternoon for over ten years. It is one of a number of villages that have engaged in this long-term non-violent resistance to the Israeli military occupation.