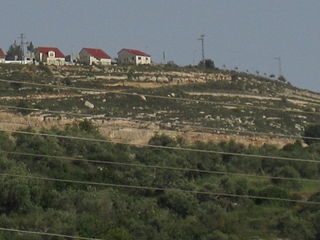 Israeli troops reportedly embarked on erecting a bypass road, on Tuesday, in the Huwara village, south of Nablus city in the northern occupied West Bank.

Local Palestinian media sources said that the road is seven kilometers-long and that it will be located on about 100 acres of Palestinian farm lands.

Ghassan Daghlas, chief of the file of Israeli colonial settlements, across the West Bank, told media outlets that Israeli army bulldozers have been bulldozing and razing Palestinian farm lands, for the second day consecutively.

Daghlas noted that the bulldozing will cause the destruction of a total of 2800 olive trees owned by Palestinians in the villages of Burin, Huwara Beta, Ourta, Yatma, Sawiya and Yasouf, located in southern Nablus city.

Noteworthy, the Israeli occupation government released, in April of 2019, footage of a new Israeli scheme for creating a road in Nablus city. The scheme involved 44 plans, many of which have reportedly been executed.

Such a scheme is believed to serve only the nearby Israeli colonial settlements, constructed illegally on Palestinian-owned lands.

This comes as Israeli leaders have recently hinted at a plan to annex the entire West Bank area, to Israel by July.

Back in 1967, Israel occupied the West Bank and a decade later, it began erecting colonial settlements on Palestinian-owned lands.