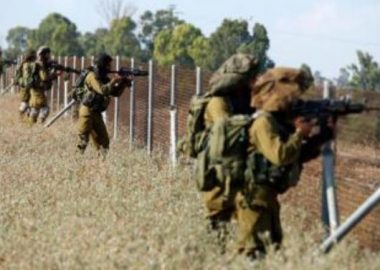 Local Palestinian media sources and witnesses said that Israeli troops, stationed on the Israeli side of the border, opened their machine guns abruptly on local farmers and shepherds in the rural neighborhoods of Alfaraheen and Alsenati in the Abbassan Alkabeera town.

The sources added that no causalities were reported, however, all farmers were immediately forced to leave their workplaces.

In a similar incident in Khan Younis city, Israeli soldiers on the Israeli side of the border, were reportedly unleashed their ammunition on farmers in the Qarrara neighborhood. No causalities were reported, witnesses said farmers fled the scene,.

Over the past several years, Israeli troops have shot at Palestinian farmers, who cultivate farm lands, along the Israel-Gaza border line, in the besieged Gaza Strip.

Those farmers and their families lived in the region before the existence of the state of Israel, back in 1948.

Also of note is the fact that Israeli warplanes attacked some locations in the Gaza Strip, Friday night, in what the Israeli army claimed, was a retaliation to a so-called homemade shell that was allegedly fired from Gaza into nearby Israeli areas.