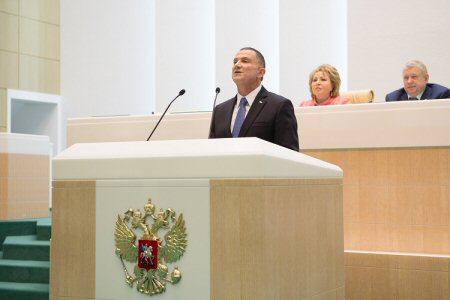 Yuli-Yoel Edelstein, speaker of Israel’s Parliament (Knesset) addressed the Russian Federation Council on Wednesday and is set to meet Russian Foreign Minister Sergey Lavrov on Thursday. Edelstein, who has previously spent time in a Soviet labor camp, focused among others on the threat of international terrorism.

Yuli-Yoel Edelstein delivered his speech before the Russian Federation Council – Russia’s upper house of parliament – in Moscow, on Wednesday. Edelstein, now Speaker of the Israeli Parliament (Knesset) was invited for an official visit by Federation Council Chairwoman Valentina Matviyenko. He gave his speech exactly 30 years after he served a three-year sentence in a Soviet labor camp for his Zionist activities.

While it is rarely mentioned in English-language media publications, Russia, and especially Moscow has a relatively strong and well-organized Jewish, and particularly Zionist lobby. Many analysts consider it to be as effective as the Zionist lobby in the United States, with the possible difference that the Zionist lobby in Russia, arguably, might be even more effective because one rarely hears about it in the public discourse. Edelstein opened his speech in new Hebrew saying:

”Thirty-three years ago I was imprisoned here in Moscow by the authorities of the Soviet Union for teaching the Hebrew language. I was imprisoned because I was teaching the language which spread to the world the ideas of rejecting tyranny, upholding the rule of justice, love of mankind and the hopes of freedom; the language in which the prophets of Israel foretold the day on which `Nation shall not lift up sword against nation; nor will they learn war anymore.` I was imprisoned because I worked to disseminate the language in which Abraham, the founder of the Jewish religion, was told `Go from your country, your people and your father`s household to the land I will show you.`… Today, I stand before you as the Speaker of Knesset Yisrael, and, in the same language which I was imprisoned for teaching, I bless you with the ancient Jewish blessing: `Shalom Aleichem`! Even in my finest dreams, I never believed I`d reach this moment. For me, this brings double closure: For me, Yuli Edelstein, and for the entire Jewish nation, which I stand here as its representative.”

It might be worth noting the “New Hebrew”, by no means is “the language which any of the prophets of Israel” spoke or wrote. New Hebrew is a constructed language “based on” some old Aramaeic, Arab and Hebrew with many elements from Jiddish added to it.

That said, Edelstein (German word that translates into jewel) continued his speech in the Russian language, mentioning “Israel’s resilience and survival despite the many wars is fought”, while stressing that the country still faces numerous threats, including the Iranian-backed Hezbollah in the north and Hamas, which according to Edelstein “chooses terror over the wellbeing of Gaza`s citizens,” in the south. Addressing global terror, Edelstein said,

”In the 21st century, terror has replaced Nazism as absolute evil. We see almost every week vehicles running over innocent bystanders, and suicide bombers blowing up school children at concerts. We must create an atmosphere of mutual respect between the different countries. An atmosphere that will facilitate closer cooperation in the fight against terror, so that no one will have to look into the eyes of a mother who lost her only son in a terror attack. I believe this is possible. We can defeat terror, but only by boldly fighting against it, side by side.”

At the conclusion of his speech, Speaker Edelstein asked to convey a blessing in Hebrew from Jerusalem, ”the eternal capital of the Jewish People, from which the message of justice and the war against evil has been coming out for nearly 3,000 years.” He then recited the following verse from Psalms: ”Peace be within thy walls, and prosperity within thy palaces. For my brethren and companions` sakes, I will now say: `Peace be within thee.` For the sake of the house of the LORD our God I will seek thy good.”

Non of the  members of the Russian Federation Council challenged Edelstein about his claims about the threat posed by Hezbollah – in the light of numerous Israeli transgressions against Lebanon – about the fact that Israel, admittedly, sponsored Hamas to weaken the Palestine Liberation Organization – or that no one asked whether Edelstein, when saying “Jerusalem the eternal capital of the Jewish people”, actually meant “Jerusalem, the city annexed by Israel, which Zionists wish to turn into the capital of a Jewish supremacist state of Israel.

It is noteworthy that Knesset Speaker Edelstein’s address was the first delivered by any Israeli at the Federation Council. The honor is usually reserved for heads of state. Following his speech, Edelstein was scheduled to take a personal tour of Moscow, during which he will visit sites that were significant in his life’s story: places where he was active as a Refusenik, the site of his arrest, the courthouse where his trial took place, the prison in which he was incarcerated, and more. Edelstein’s visit to Moscow is taking place, symbolically, 30 years after his release from a Soviet labor camp.

Edelstein began his official three-day visit to Moscow Tuesday afternoon with a meeting with the Chairwoman of the Federation Council (upper house of the Russian parliament), Valentina Matviyenko. Edelstein was greeted warmly by Matviyenko, signed the guestbook at the entrance to the Federation Council, and presented his host with a bouquet of flowers.

During their work meeting, Matviyenko thanked Edelstein for accepting the invitation to visit Moscow, and said she believes the visit will ”strengthen the relations between our countries and parliaments.” ”I am also awaiting your speech tomorrow at the plenum of the Federation Council. I visited Israel twice last year, and we are planning many meetings between the parliaments at various levels. The parliamentary friendship groups of the Knesset and the Federation Council will work on a `road map` for the continuation of our joint work.”

Edelstein thanked his host for the warm welcome and said, ”Our excellent relations, which we will continue to develop, are generally focused on two things: One is how to further strengthen the economic and cultural ties through joint parliamentary activity. And the second is how to discuss our differences of opinion in an in-depth, honest and serious manner in order to narrow the gaps. I believe this visit presents an opportunity to discuss everything that has already been mentioned, as well as additional matters we will begin to deal with starting today.”

During a press conference held after the meeting, Speaker Edelstein said, ”It is known that our region is sensitive, and Russia is playing a significant role in it. Therefore, it is very important that we continue the cooperation and resolve the differences of opinion between us, if they exist.”  Matviyenko referred to the allegations that Russia had intervened in the US elections as ”hysteria which does not correspond with reality.” Russia, she stated, has not intervened in any election, ”just as we would not want anyone intervening in our affairs.”

On Thursday, June 29, at 10:30, Edelstein will be meeting with Russian Foreign Minister Sergey Lavrov. Thursday, at 15:30, he is scheduled to meet the Chairman of the State Duma (lower house of the Russian parliament), Vyacheslav Volodin. At 17:30 he will hold a reception for leaders of Russia’s Jewish community.