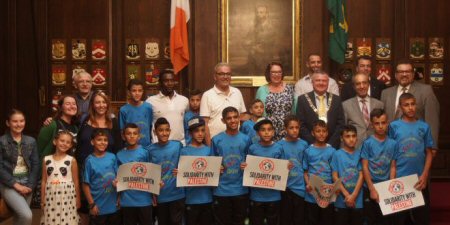 The Gaza Strip is now experiencing a full-on energy disaster, with its already inadequate supply of three to four hours per day of electrical supply now being cut by 45 to 60 minutes per day.

The United Nations has warned that these power cuts threaten a “total collapse” of basic services in Gaza, while Amnesty International warned of “looming humanitarian catastrophe” in the territory.

After a decade under Israeli siege, these cuts are wreaking havoc on Gaza’s already stretched healthcare sector. There has been an increase in chronic malnutrition and mental-health issues among the residents, all with dwindling medical supplies to treat them.

To compound this misery, Israel bombed Gaza on the second night of Eid, last Monday June 26th, causing immense psychological trauma to the Palestinians trapped there.

Twenty children from Gaza will get a chance to visit Ireland and play football this summer, PNN reports.

As a way to show solidarity with the people of Gaza and to raise awareness in Ireland about the siege, Gaza Action Ireland (GAI) brought a group of children from the Al Helal Football Academy to Ireland, last summer, when they played wonderful football and charmed everyone who met them, including President Michael D. Higgins.

“As the trip was such an uplifting, joyous experience, we are doing it all again this year,” GAI coordinator Zoë Lawlor said. Starting in late July, the children from Al Helal, in Gaza City, will visit and play football in Dublin, Leitrim, Kinvara, Cork and Limerick.

As part of the large effort to raise funds for the trip, a performance of Katie O’Kelly’s acclaimed play about Palestine, The Olive Tree, will take place in Liberty Hall, Dublin, tomorrow [[THURS]] evening, at 8pm. Artist and activist Robert Ballagh will introduce the one-woman show and there will be music afterwards in the Liberty Hall bar.

The tickets are just €10, and further information is available on Facebook.Contributions to fund the children’s visit to Ireland can also be made online: http://gazaactionireland.ie/