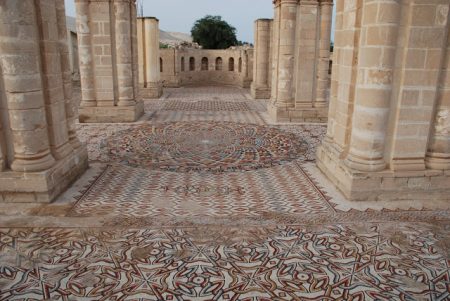 The Palestinian Ministry of Tourism and Antiquities has unveiled the world’s largest floor mosaic for public display, in the West Bank district of Jericho.

The mosaic covers the floor of the reception hall and the large bath of Hisham’s Palace, an Islamic archaeological site in the north of Jericho, and has been described as one of the largest and most beautiful mosaic floors in the world.

It is composed of 38 large tiles and spans a total area of 826 square meters, according to WAFA correspondence.

The mosaic was found under rubble attributed to an earthquake that struck Jericho in 947 A.D., when it was first discovered in the 1930s.

The archaeological piece depicts a symbolic representation of the Tree of Life, with a lion preying on a deer, at the left side of the tree, with two other deer forging peacefully on the other side of the tree. While the site was discovered in 1873, the first excavations were conducted in the 1930s, by the British archaeologist Robert Hamilton.

The ruins of Hisham’s Palace, built during the Umayyad Empire, stand on 60 hectares in Khirbat al-Mafjar, west of the Jordan Valley and 260 meters below sea level.

Funded by Japan, the ministry conducted restoration works for nearly a year, to remove the rubble and uncover the mosaic floor.

Within the palace are several residential floors, a mosque, and a courtyard with a portico, a fountain and a steam room.

The site was believed to have been built by the Umayyad Caliph Hisham bin Abd al-Malik, between 724 and 743 A.D., but experts believe his nephew and successor al-Walid II is actually responsible for building the palace.

Al-Walid II lived in the structure, but it was never completed, and an earthquake destroyed much of it in 749.

The ceremonial opening of the floor was attended by Minister of Tourism and Antiquities Rula Ma’ay’a, Jericho Governor Majed al-Fityani, Secretary-General of PLO Executive Committee Saeb Erekat, and the Japanese Ambassador to the Palestinian Authority (PA), Takeshi Okubo, besides to a host of other officials.

Ma’ay’a said that the mosaic floor is expected to boost tourism in Palestine and Jericho.

She further noted that the floor was discovered many years ago, but was covered in sand and material to protect it from climate change, until a roof was finally built over it.