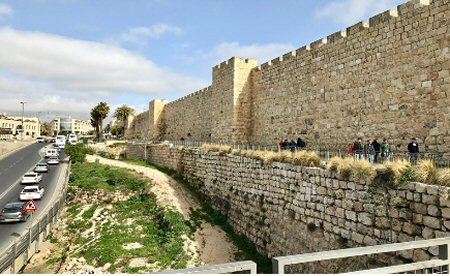 A Jerusalem municipality member advanced, on Sunday, a suggestion to demolish the historic wall of Jerusalem’s Old City district, under the pretext of easing the traffic crisis.

Israel Hayom news quoted King as saying that the wall was built in the 16th century, by one of the Ottoman caliphs, to protect Jerusalem from war, and it is no longer needed, as well as being the cause of a severe traffic crisis.

He added that the wall could not be considered sacred and historical; therefore, it can be fully or partially removed, in order to solve the traffic crisis.

The Ministry of Foreign Affairs and Expatriates condemned Israeli Judaizing policy of the holy city, warning of extremist settlement organizations’ plans against Jerusalem and the Old City district, located in occupied East Jerusalem.

The ministry called, in a statement, on the Arab and Islamic world to hold to its responsibility toward protecting the holy city and calling upon them to not view the Israeli violations in Jerusalem as abstract numbers and things that have become commonplace and familiar.

He stressed the need to implement the resolutions of the Arab and Islamic Summits on Jerusalem, especially regarding the provision of the steadfastness of the Jerusalemites, in the face of the forced displacement that they are subjected to, as well as the effective action to protect Jerusalem and its holy sites.

It also called upon the international community and the United Nation to take urgent actions to stop Israel’s Judaization plans and to force Israel to abide by international legitimacy and its decisions, first and foremost the resolutions on Jerusalem.

The walls of Jerusalem and the Old City were added, in 1981, to the UNESCO World Heritage Site. They were built during the reign of Ottoman Sultan Suleiman I, between 1535 and 1538. The walls surrounded the Old Town of 4,018 meters, with an average height of 12 meters and a thickness of 2.5 meters.

According to Al Ray Palestinian Media Agency, Israeli occupation authorities used the walls to observe and to control the entry and exit of Palestinians through eight historic gates.