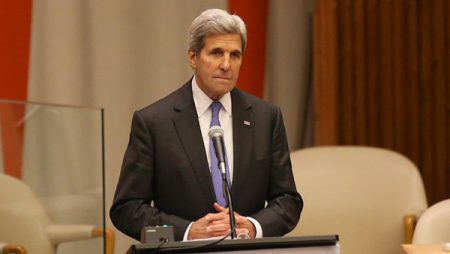 Israel cannot have both, US Secretary of State John Kerry said, in unprecedented comments, Sunday, at the annual Saban Forum hosted by the Brookings Institution, in Washington DC.

“There is no status quo. It is getting worse,” said Kerry, according to Al Ray, referring to the Israeli-Palestinian conflict. “It is moving in the wrong direction.”

Kerry, who has described himself as an “unapologetic friend of Israel”, said that Tel Aviv is, nonetheless, “ignoring all our warnings regarding settlements”.

Still, the top diplomat said that the “tipping point” between the alternatives had not yet been crossed.

The comments are some of the sternest to date from the US, Israel’s staunchest ally on the international stage.

The Obama administration recently agreed to increase Israel’s foreign military financing to $3.8 billion per year for the next decade, from $3.1 billion.

But Israel cannot broker a separate peace with the Arab world if it does not move toward a Palestinian state, Kerry said.

“That is a hard reality,” Kerry said.

Israeli premier Benjamin Netanyahu has long insisted that his government is committed to a two-state solution, but Palestinians have criticized his policy of settlement expansion as a major impediment to the realization of their state.

As recently as March of 2015, shortly before his re-election, Israeli Prime Minister Benjamin Netanyahu said that he would not allow a Palestinian state, if re-elected, effectively reneging on his 2009 endorsement of a two-state solution.

Netanyahu also vowed, in recent days, that he would never allow the Palestinian people to have East Jerusalem as their future capital and pledged to build “thousands” of settler units across the city.

Kerry emphasized that settlements are a “barrier to peace” with the Palestinians.

“Out of the mouths of ministers, in the current government, have come profoundly disturbing statements publicly,” he said, referring to statement dismissing a Palestinian state. “This is the predicament. This is where we find ourselves,” he added.