Eviction Orders Delivered to 8 Facilities in the Negev 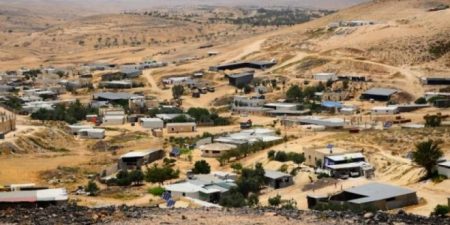 Israeli authorities, on Sunday, gave eviction notices to eight Palestinian-owned facilities in the Umm al-Hiran village, in the Negev Desert.

Head of the popular committee in the village, Raed Abu Qei’an, affirmed that Israel Land Administration crews stormed the village on Sunday, escorted by Israeli police forces, and delivered the evacuation orders, Pal Info reported, according to the PNN.

The evacuation orders were delivered against four houses and four sheds in the village, he added.

Abu Qei’an pointed out that Israeli authorities are preparing for a new demolition campaign against the village in the near future.

On Nov. 22, Israeli forces stormed the village with the aim of demolishing 15 homes inhabited by 90 residents, mostly children and women.

However, massive popular presence succeeded in preventing the demolition process.

Israeli authorities seek to demolish the village and to forcibly displace its residents, and for the sole purpose of establishing a new Jewish settlement named “Hiran” over its ruins, in a flagrant violation of international laws and principles.

Umm al-Hiran is one of 51 unrecognized Bedouin villages in the Negev. The villages are deprived of basic services like housing, water, electricity, education and health care.