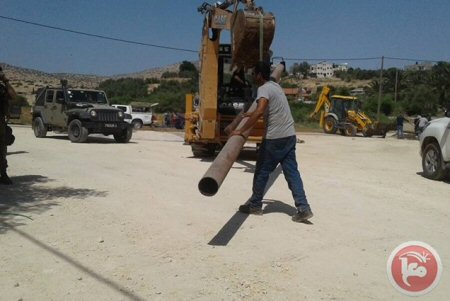 Israeli forces raided the Palestinian village of Bardala, in the northern area of the Jordan Valley, and destroyed 400 meters of water pipelines, which Israel claims are illegal, on Thursday.

According to Dirar Sawafta, a member of the Bardala village council, Israeli forces stormed the village, razed and dug several holes in one of the water lines in search of water holes.

Israeli forces destroyed more than 400 meters of water pipelines, which is an important life source to many Palestinians residents of the valley, who are mainly farmers or Bedouins, and mostly living in enclaves closed off by Israeli military zones, checkpoints, and more than 30 illegal Israeli settlements.

Sawafta added, according to Ma’an, that Israeli forces destroyed the water pipelines under the pretext that they are illegal.

Recently, Israeli bulldozers and forces have razed the area, in search of water holes, and destroyed several water sources in the village and several other areas in the Jordan Valley.

The Jordan Valley and Dead Sea area holds nearly one-third of the West Bank’s land and is home to roughly 60,000 Palestinians.

Under the 1993 Oslo Accords, which delegated various degrees of autonomy to the Palestinian Authority (PA) around built up and urban areas, Israel retained full civil and military control over 60% of the West Bank, which is now known as “Area C.”

“Area A” is under full PA control and “Area B” is under Israeli military control; in this area the PA is in charge of civilian affairs. This has effectively divided the West Bank into three main non-contiguous areas.