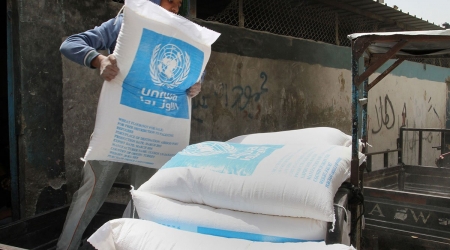 On the record quote from Chris Gunness, UNRWA Spokesperson:

“The recent announcement, by COGAT (Coordinator of Government Activities in the Territories), that new measures will be taken to suspend exports from the Gaza Strip and restrict the import of goods to only humanitarian supplies approved by COGAT, can be expected to have profound and far reaching consequences for already desperate civilians in Gaza, nearly 75 per cent of whom are Palestine refugees registered with UNRWA and more than half of whom are children. These measures will also likely lead to increased demand for UNRWA services at a time of unprecedented financial crisis and when Gaza is in the midst of a deepening and now protracted humanitarian crisis. Nearly 80 per cent of the population (1.2 million) is forced to rely on humanitarian assistance to cover their basic needs, including food, and the unemployment rate stood at 49.1 per cent as of the first quarter of 2018”.

“These additional restrictions further penalize the entire population in Gaza without regard to individual responsibility.  Measures taken by Israel must be consistent with its international legal obligations. These developments risk exacerbating the worst impacts of the blockade and crippling further the economic capacity and livelihoods needed to support two million residents. The UN has repeatedly called for a full lifting of the blockade, a form of collective punishment contrary to Israel’s obligations under international law”.

The Commissioner-General, Pierre Krahenbuhl, pointed out: “These new measures are of great concern. They are counter-productive not least because they impact an entire population and further negatively affect Gaza’s economy. They will have serious repercussions in particular for women and youth.

“After eleven years of blockade, these measures will compound the sense of desperation and isolation, further depriving the next generation of hope and dignity.

“These developments remind us of the imperative necessity to address the underlying causes of the conflict and to take meaningful political action, including ending the illegal blockade of Gaza.”

07/12/18 Palestinian Government: US and Israel Work to Implement “Deal of Century”