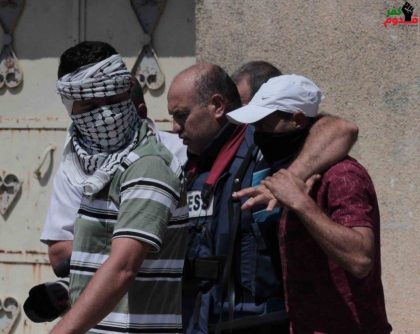 Israeli soldiers resorted, Friday, to the use of excessive force against the nonviolent protesters in Kufur Qaddoum village, in the northern West Bank district of Qalqilia, shooting a journalist with a gas bomb in his head, and causing dozens of residents to suffer the effects of teargas inhalation.

Morad Eshteiwy, the coordinator of the Popular Committee in Kufur Qaddoum, said the soldiers assaulted the nonviolent protesters, just after they started marching from the center of the village, and fired gas bombs at them, leading to clashes.

Eshteiwy added that one of the gas bombs struck a photojournalist, identified as Nidal Eshteyya, in the back of his head, before medics rushed him to Rafidia Hospital, in the northern West Bank district of Nablus.

He also said that the soldiers fired dozens of gas bombs at the protesters, and many homes in Kufur Qaddoum, causing dozens of residents, including five family members, to suffer the severe effects of teargas inhalation.

The army also sprayed the protesters, and many homes with wastewater mixed with chemicals.

Local sources in the village said the soldiers have recently started a very serious escalation campaign against Kufur Qaddoum, especially by deliberately destroying water pipelines and electricity networks, in addition to installing roadblocks and restricting the freedom of movement of the residents. 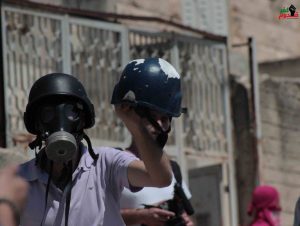 Kufur Qaddoum residents started their weekly protests more than 13 years ago, after the army completely closed the village’s main road to enable easy access to the Israeli colonists, driving to and from the illegal Kedumim colony, that was built on privately-owned Palestinian lands.

In related news, dozens of Palestinian, Israeli and international peace activists marched, Friday, against the Israeli Annexation Wall and colonies, in Bil’in village near Ramallah, raised Palestinian and Scottish flags to thank the Scottish activists for supporting Palestine during the soccer match between Scottish and Israeli teams.