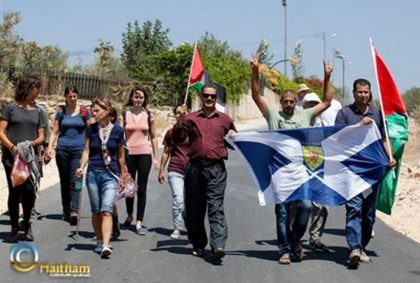 Dozens of Palestinian, Israeli and international peace activists marched, Friday, against the Israeli Annexation Wall and colonies, in Bil’in village, near Ramallah, raised Palestinian and Scottish flags to thank Scottish activists for supporting Palestine during the soccer match between Scottish and Israeli teams.

The protesters marched this week against the ongoing and escalating Israeli policies of illegal annexation, and theft of Palestinian lands for the construction and expansion of the illegal colonies in occupied Palestine.

They also chanted for national unity, ongoing nonviolent resistance, the release of all Palestinian detainees and the liberation of Palestine. The Israeli military was extensively deployed in and around the village, surrounded the nonviolent protesters, and prevented them from advancing towards the villagers’ orchards and farmlands.