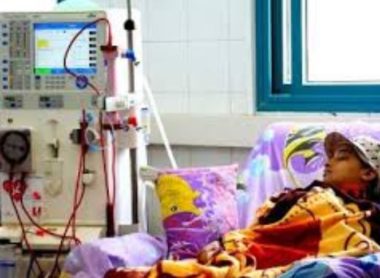 Dr. Abdullah al-Qishawi, the head of the Kidney Branch at the Shifa Medical Center in Gaza, has warned that the lives of 425 Palestinian patients, including children, who require kidney dialysis, is at a serious risk due to the ongoing Israeli siege on the Gaza Strip.

Dr. al-Qishawi stated that the Israeli embargo is preventing essential medications and equipment from entering the Gaza Strip, despite the repeated urgent calls and appeals by the Health Ministry to the international community.

He stated that the patients require the dialysis sessions regularly, including those who are scheduled to receive kidney transplant, and have gone through all required preparations, including special medications.

Dr. al-Qishawi added that there are 54 patients who started receiving medications ahead of scheduled kidney transplant surgeries, and are now at risk of serious complications, including death.

Furthermore, Dr. al-Qishawi stated that the serious shortage of medications is compounded by the ongoing power blackouts in the coastal region, and impact the quality of kidney dialysis machines, while the Israeli siege is also preventing the entry of spare parts needed to keep them running.

He said that even when just one machine stops working, the patients are the ones who suffer the consequences, and face serious complications, which would likely lead to death, adding that there are 425 patients in the Gaza Strip, who have kidney failure, and completely depend on dialysis.

Related: Three more patients die due to the ongoing Israeli siege on Gaza