Life Under Siege: A Farmer’s Struggle with the Occupation 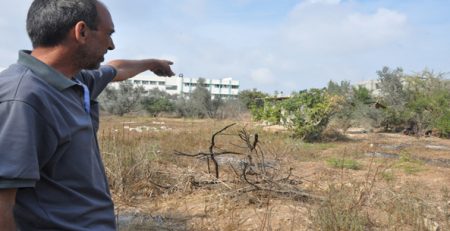 Abdel Salam Manasra is a Gazan citizen, in his 50s, who has dedicated his life to agriculture and farming. Farming has always been his family’s main profession, as inherited from their ancestors. Abdel Salam’s farmland is located east of the Shuja’eyya neighborhood in Gaza city, near the Israeli border – an area which used to represent the food basket of Gaza, with its variety of stone and citrus fruits, fig and olive trees, as well as different kinds of vegetables.

Up until the early 2000s, before the tightening of Israeli restrictions on Gazans, “3 to 4 farmers worked on every 1000 square meters in this area, which was a major source of income”, Abdel Salam describes. The tightening of the siege went hand in hand with an increase of Israeli terror that harshly affected the farmers: Ground incursions and invasions caused death and led to leveling of farmland, uprooting of trees and an increasing level of unemployment.

With the Israeli ban on the exportation of goods, the prices for agricultural products in Gaza collapsed.  “The farmers, including me, found no financial reward that would cover at least the basic needs of our families”, Abdel Salam adds. A large number of farmers in the area had to stop working on their farmlands after the closure of 2007, because they could not afford to sustain it. Agriculture-related prices such as crops and fertilizers were more than ten times higher than before 2006, forcing Abdel Salam to sell his greenhouses. The closure did not only pose restrictions on the availability of fertilizers and pesticides, but their high prices are not affordable for the majority of farmers. Furthermore, a large part of the available pesticides do not have a fertilizing effect on the soil because they lack essential components.

After being forced to sell his greenhouses, Abdel Salam tried to generate income from planting olive trees. “Today, I am 52 years old and I have tried to plant olive trees three times”, but every attempt was stopped by the Israelis, either through bulldozers or shells and missiles during the 2014 offensive.

A second major consequence of the ongoing closure is a buffer zone stretching from the Israeli border up to 300 meters into the Gaza Strip, which is exposed to shootings and shelling by Israeli forces. A large number of families used to have farmland in this area, which has increased the production of agricultural products but the farmers cannot reach it without risking their lives. Several attempts of farmers, supported by the ICRC and other international organizations, to plant wheat and other basic crops were met with violence by the Israeli forces, leaving Palestinian farmers injured or dead.

The farmers of Shuja’eyya are not only suffering from the harsh circumstances imposed on the farming sector but also from miserable living conditions.  Like many families, Abdel Salam and his brothers spent all their money on their farmland and houses, which were largely destroyed by the Israeli aggression of 2014. With all that said, Abdel Salam stresses: “We will continue to replant our land, for the connection we have with the land.” He is currently working on a project to restore family owned land of 60 dunams (equaling 60,000 square meters). By digging a water well and building a system of pipelines, he is hoping to bring his land back to life.

“I would like to send the message that the farmer is a helpless person who has nothing in his hand but his axe”, Abdel Salam concludes. Therefore, he should have a free hand to use his farmland, to sell products and cover the basic needs of his family, without having to risk his life and being subjected to shootings by Israeli forces.

via the Palestinian Centre for Human Rights (PCHR).