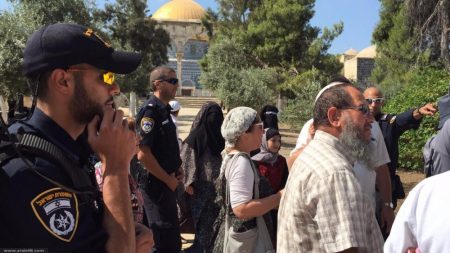 Escorted by Israeli police, a group of extremist settlers have again stormed the courtyards of Al-Aqsa Mosque.

According to Jerusalemite sources, the settlers, accompanied by rabbis, have provocatively re-stormed the courtyards of the mosque and taken photos of several places there.

Prayers and students who were present try to prevent the settlers from invading the courtyards, but to no avail.

Israeli settlers invade Al-Aqsa Mosque on an almost daily basis, according to Al Ray, for the sake of the temporal and spacial division of the mosque and the Judaization of the city.