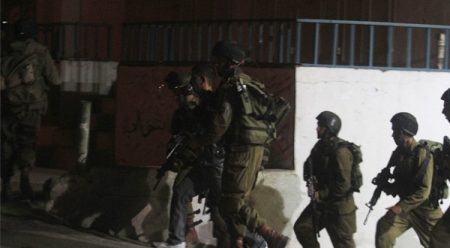 An Israeli soldier, on Monday night, sustained injuries after he was shot by gunmen near the illegal Efrat settlement, to the south of Bethlehem, central West Bank.

The gunmen were allegedly Palestinians, who opened fire towards a group of soldiers near the settlement, wounding one of them.

It was added, according to the PNN, that the soldier was evacuated by an Israeli ambulance, while the Israeli army launched a manhunt for the shooters.

Additionally, on Monday morning, an elderly Palestinian man with mental disability was shot by soldiers at Huwwara checkpoint.

Also, a young Palestinian worker died after he fell from a height while being chased down by Israeli soldiers west of Salfit, northern occupied West Bank.

On Tuesday overnight, Israeli forces carried out a wide arrest campaign all over the West Bank.