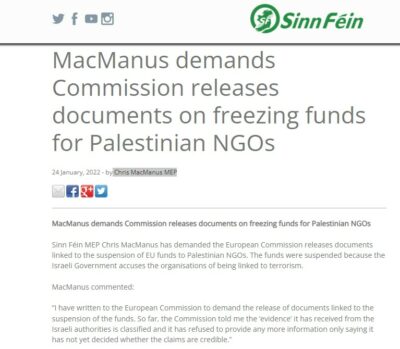 By Chris MacManus MEP: Sinn Féin MEP Chris MacManus has demanded the European Commission releases documents linked to the suspension of EU funds to Palestinian NGOs. The funds were suspended because the Israeli Government accuses the organizations of being linked to terrorism.

“I have written to the European Commission to demand the release of documents linked to the suspension of the funds. So far, the Commission told me the ‘evidence’ it has received from the Israeli authorities is classified and it has refused to provide any more information only saying it has not yet decided whether the claims are credible.”

“It makes no sense to cut off this badly needed funding before deciding if the information has any truth to it and it goes totally against the right to be considered innocent unless proven otherwise.”

“I would understand a level of caution would be required if the claims were made by a credible human rights agency, but remarkably the Commission has admitted in a letter to me that “past allegations [by the Israeli Authorities] of the misuse of EU funds have not been substantiated.”

MacManus described the Commission’s behaviour as an affront to democratic transparency at the expense of EU citizens. “MEPs are the representatives of the EU citizens who fund the EU budget and as a result should be entitled to have some oversight in who receives funding and who does not. It is simply not good enough to say the information is classified.”

The Midlands Northwest MEP concluded, “I will continue to pursue this issue until the full funding is restored as in my opinion this is a thinly veiled attack on Palestinian civil society and the EU has let themselves be complicit.

Chris MacManus is Sinn Féin’s MEP for Midlands Northwest. Chris has been active in Republican politics for over 30 years, fifteen of those as an elected member of Sligo Borough Council, and subsequently representing the Sligo\ Strandhill Constituency on Sligo County Council.

A former chairperson of Sligo Sinn Féin and member of the party’s National Executive, Chris has represented Sinn Féin throughout Ireland and abroad.