MADA Calls for Independent Investigation into Killing of Journalists 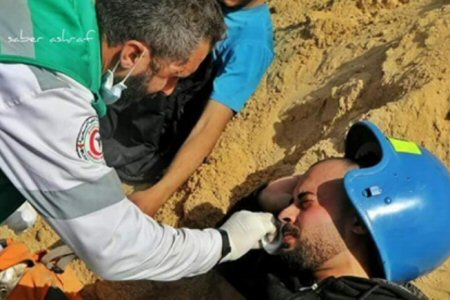 The Palestinian Center for Development and Media Freedoms (MADA) has called for the formation of an independent commission of inquiry, into the killing of Palestinian journalists Ahmed Abu Hussein and Yasser Murtaja, during field coverage of the Return Marches along the borders of Gaza Strip.

Journalist Ahmad Abu Hussein, 25 years old, died on Wednesday  after being targeted with an explosive ammunition bullet, fired by Israeli snipers, while covering the “Return March”, east of Jabalia, in the Gaza Strip, 19 days following the killing of Yaser Murtaja (31years), who was also targeted by an Israeli occupation sniper.
MADA center documented at least 12 journalists targeted with live ammunition by Israeli snipers in the Gaza Strip; a grave breach of the fourth Geneva Convention, since the start of the march 30/03/2018, until the evening of 24/4/2018.

Ahmed Abu Hussein, a journalist at the “Sawt Al Sha’b” the Voice of the People radio station in Gaza, was wounded on 13/4/2018. A member of the General Secretariat of the Journalists Syndicate and a colleague of the journalist Abu Hussein in “Sawt Al Sha’b” Voice of the People, journalist Rami Al-Sharafi reported to MADA Center that journalist Abu Hussein, at 2:30 pm on 13/4/2018, was covering the peaceful demonstration hundreds of meters away from the border fence in East Jabalia,. He was identifiable with the “PRESS” vest.

He was targeted by Israeli forces with an explosive live bullet, just below the press vest, which penetrated his left abdomen. He was immediately transferred to the Indonesian hospital, north of Gaza, where he underwent a surgery that lasted 3 and a half hours, in which one kidney, the spleen and part of the pancreas were removed in order to save his life. He was diagnosed with acute bleeding related to aortic artery.

The next day, procedures were started to obtain a permit for him, to be transferred for treatment in Ramallah. He was actually transferred on Monday 16/4, to the Ramallah Medical Complex, where it was found found that he was suffering from toxemia. He underwent another surgery and his health improved until Thursday 18/04, when his health status deteriorated. He was then transferred to the Israeli Hospital Tel Hashomer, were they discovered he has a brain damage that led to Ahmed’s coma, until about 4:15 pm on Wednesday, 25/4, where he was pronounced dead.

The killing of journalist Ahmed Abu Hussein the total number of journalists killed by the Israeli occupation forces to 43, since the beginning of 2000, in the West Bank and Gaza Strip.

The information provided by MADA was based on various data available through a monitoring and documentation unit, regarding the killing of journalists Ahmad Abu Hussein and Yasser Murtaja, and the wounding of 12 other journalists with live ammunition (causing severe injuries, some of the injuries left lifetime physical effects on journalists). this in addition to doubled numbers of partial injuries among journalists.

However, PNN further reports, the culture of impunity enjoyed by the Israeli occupation, and the ongoing target of journalists that goes without accountability, encourage Israeli soldiers to continue to commit these crimes at a fast pace. Therefore, MADA center calls for the formation of an independent commission of inquiry into all these crimes, particularly the killing of journalists, and calls on all international communities to put pressure on Israel, to take real action in demanding the prosecution of perpetrators, and to put an end to acts of impunity that are an incentive for the Israeli army to carry out its flagrant attacks against journalists and against media freedoms in Palestine.

In the photo, the journalist Ahmed Abu Hussein after being targeted by Israeli Occupation Snipers in the field (By Photographer Saber Ashraf).