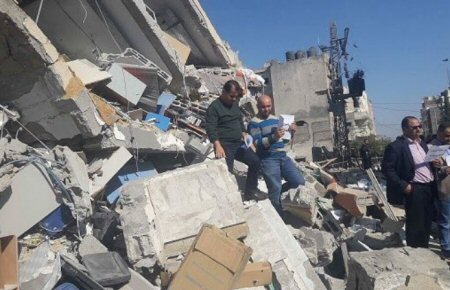 The Palestinian Center for Development & Media Freedoms (MADA) has condemned the destruction of Al-Aqsa TV Headquarters on Monday evening, 12 November, 2018, by the Israeli army, in implementation of the resolution taken by the senior officials and politicians at the Israeli government, as various data indicates.

Al-Aqsa TV Headquarters was destroyed in Gaza, by Israeli warplanes, about a half an hour following the end of a security meeting held by the Israeli leadership with the participation of Israeli Prime Minister, Benjamin Netanyahu, at “Kiryah” Military Base, near Tel Aviv. This was followed by announcements reported, by Israeli media, that “the go-ahead was given to the Israeli army to carry out more severe attacks” on Gaza.

Al-Aqsa TV Director, Mr. Ibrahim Thaher, stated to MADA that the TV office had received a phone call from Israeli Intelligence in which it was informed that the headquarters would be destroyed. Accordingly, the headquarters were evacuated of its staff immediately. Ten minutes later, drones began bombarding the headquarters with “warning” missiles, which was followed by a missile fired by F16 warplane, leading to the destruction of the headquarters and the interruption of transmission.

PNN further reports that this is the third time the headquarters of Al-Aqsa TV have been destroyed by the Israeli occupation army.

The measure is part of a large-scale Israeli systematic targeting aimed at silencing the media and journalists, and blurring the practices and attacks of the occupation in Palestine. The Israeli army has destroyed in three large-scale military attacks, which erupted in Gaza Strip in the years 2008, 2012 and 2014, totaling 61 headquarters of media agencies. In 2014, 17 journalists were killed, in the Gaza Strip.

Taking into consideration the serious escalation of the Israeli occupation authorities and its army’s targeting journalists and media outlets in Palestine, MADA believes that the impunity of perpetrators of such crimes has encouraged the Israeli army to continue committing such acts in an official and blatant manner, as in the case of destroying the headquarters of Al-Aqsa TV. Therefore, MADA Center has called on the Special Rapporteur of the freedom of expression at the United Nations, as well as the international human rights organizations, to endeavor and investigate the crimes of the Israeli occupation against media freedoms in Palestine, and to bring the perpetrators, and all those involved, to justice.