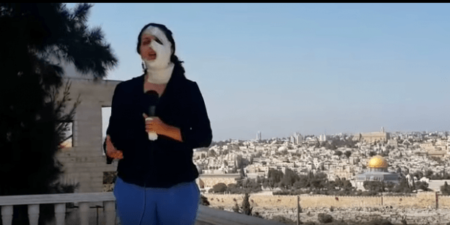 Journalist Hanaa Mahameed was injured by a sound grenade while covering clashes in East Jerusalem in October 2015.

The Palestinian Center for Development and Media Freedoms (MADA) launched a media campaign on social media, yesterday, on the protection of the rights of women journalists in Palestine, under the title, “Women Journalists Have Rights to be Protected”.

The campaign, which was launched through social media, aims to shed light on the abuses and violations women journalists face during their work, and to identify the reality about the environment they work in, especially in relation to profiling some jobs and its implications on the total number of women journalists working (compared to male journalists). Knowing that the number of female media students graduates from universities more than the number of male students.

This month-long campaign comes as part of MADA’s efforts to defend the rights of women journalists, who account for 29,3% of the total number of Palestinian Journalists Syndicate members, 33.3% of them hold editorial positions in the West Bank, according to the Palestinian Central Bureau of Statistics in 2017. The unemployment rate of female journalists is 75%, while the unemployment rate of male journalists is 47% according to the same source.

PNN further notes that women journalists are exposed during the work to the same risks and challenges faced by male journalists, such as targeting by bullets, physical injuries, arrest, prosecution and preventing from covering by the Israeli occupation authorities. They are also subject to discrimination as well as other violations and challenges linked to the prevailing societal culture.

This campaign is part of a project funded by Open Society foundations.