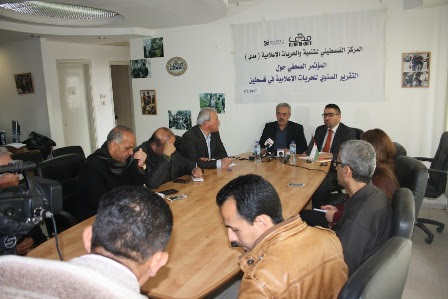 The Palestinian Center for Development and Media Freedoms, “MADA”, organized a press conference on Wednesday 02/08/2017, and released its annual report of violations against media freedoms in Palestine during 2016, according to the PNN.

Mr.  Mousa Rimawi- General Director of MADA center and Dr. Ammar Dweik- General Direct of The Independent Commission for Human Rights kicked off the conference with an opening speech.

Rimawi said that 2016 witnessed a significant decrease in the total number of violations monitored against media freedoms in Palestine, compared to 2015.  MADA monitored a total of 383 violations during 2016, in Palestine.

The major cause of the decline in Palestinian violations was mainly due to a relatively stable situation, as no internal events erupted, no repercussions for the internal political division were monitored, which was and still is considered as one of the most prominent causes of the violations targeting media freedoms in West Bank and Gaza.

The murder of a media student at Al-Quds University, Omar Sajdieh (22 years), by Israeli forces, besides the injury and detention of dozens of Palestinian journalists, raids, seizures and sabotage of media outlets, including the shutdown of 12 Palestinian media outlets and printing houses. are all considered as the gravest and most prominent violations recorded in 2016.

He said that Israeli violations against media freedoms are generally featured in a context of 18 different types, but that the bulk revolved around 7 particular types which include physical assaults and detentions, prevention of press coverage, closure of media institutions, seizure/ sabotage of equipment, and detention of journalists. However,  the most serious violations constitute around 84% (208 violations) of Israeli violation, in total (249 violations), during 2016.

He added that “last year witnessed attempts of Palestinian security apparatuses, in [the] West Bank and Gaza Strip, practicing certain types of torture against Palestinian journalists during their detention and interrogation, besides the continuation of prosecuting journalists in relation to their publications of social media sites.”

He also noted that ”2016 witnessed a total of 86 Palestinian violations in West Bank against media freedoms, which fell under 14 types, the majority were three types (summon and interrogation/ arrest and detention/ prevention of coverage).

Whereas a total of 48 violations against media freedoms were monitored in Gaza Strip, most of them fell under 9 types, and the majority of violations revolved around two major types (summon and interrogation/ detention and arrest). Noting that the political internal division that occurred since 2007 is still considered as the major reason for such violations.

Clarifying that such differences does not implicate that media freedoms’ status in Gaza Strip are better than in West Bank, but it is due to numbers of journalists and media outlets are less in Gaza.

Dr. Ammar Dweik assured the importance of MADA’s efforts in defending media freedoms, particularly monitoring and documenting violations against freedom of expression and opinion, highlighting the importance of the collective cooperation of all Palestinian Civil society organizations to expose all Israeli violations, and hold perpetrators accountable, of all systematic assaults against Palestinian journalists. All through a cumulative work that ensures the presence of a well-developed legal environment which guarantees media freedoms in Palestine.

Dr. Dweik also disclosed that the Independent commission for human rights demanded the attorney general stop all procedures against the writer Abbad Yahia, author of the novel entitled “Crime in Ramallah,” and to transfer the case to the Ministry of Culture, to solve.

He also assured that summoning the author and prosecuting him, and the withdrawal of the novel, constitutes an infringement of the Palestinian modern image, and its progress and the protection of creativity and creators. It is of particular note that Palestine ratified several international treaties which assure the respect of freedom of opinion and expression in all aspects.

He also explained that the commission considered criminal proceedings against the Palestinian novelist as a precedent in Palestine, since the establishment of the Palestinian Authority. Besides the fact that such procedures may open the way to legitimize incitement and personal attacks against the author on social networks, which could pose a threat to his personal safety.

MADA, in its report, welcomed the decline of violations against media freedoms in Palestine during the last year. MADA also expressed its concern over the continued and regular violations, recommending the following:
MADA urges…

The international community to compel Israel to respect freedom of expression that is guaranteed in the International Covenant on Civil and Political Rights.
An immediate stop of Israeli pressure on social media companies, including Facebook and Twitter, to posing restrictions on freedom of expression.
Immediate release of all Palestinian journalists and to stop administrative detention.
Stop the policy of shutting down media institutions and compensate all institutions that were shut down, or had their equipment confiscated or destroyed.
Hold aggressors of journalists accountable.

On the Palestinian side:
Palestinian security forces (West Bank/ Gaza Strip) should comply with the Palestinian Basic law in terms of respecting freedom of expression.
Amend articles and clauses that are related to “publication crimes” in the Jordanian penal code 1960, which applies in the West Bank, and certain amendments on publication and printing law (1995).
Enacting modern Palestinian laws which are in line with international standards, linked to media freedoms/ freedom of expression and, particularly, access information law as a fundamental step towards democracy.
Protection of human rights, in general, and rule of law to serve as a deterrent in case of future violations, especially as Palestine did in fact ratify several international treaties including the International covenant on civil and political rights without reservation.
Hold aggressors of journalists accountable.