MADA Report on Media Freedoms Violations in Palestine During December 2018 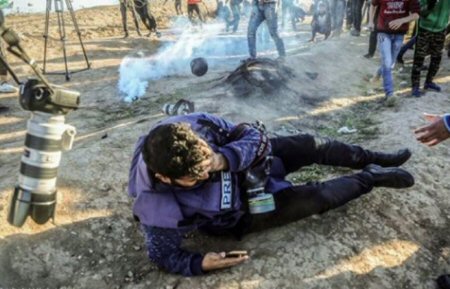 December 2018 has witnessed a decline in the number of violations against media freedoms in Palestine, compared to the previous month; but, it has remained at high levels, and most of them constitute serious attacks against the lives of journalists and media freedom in Palestine.

The Palestinian Attacks:
The Palestinian attacks registered during December show a slight rise amounting to eleven attacks, compared to eight during the month of November, according to the PNN.

The Palestinian attacks against media freedoms, during December, included Palestinian security forces beating journalists Abd Al-Muhsin Shalaldeh and Malik Al-Ja’bari while they covered a march in Hebron, in addition to detaining Al-Ja’bari for about two hours.

A photographer, Abdelkareem Mseitef, was detained in the headquarters of the Palestinian Intelligence, Al-Balou, for four and a half hours while he was covering a march in Ramallah. A freelance journalist, Sami  Saed Al-Saee,  reports that he is prohibited from transmitting any news in connection with the governor or the Tulkarem Governorate. Journalist Mutasem Saqf Al-Heit was arrested by Palestinian Preventive Security in Nablus. Journalist Abdelmuhsen Shalaldeh was summoned and questioned by the Palestinian Intelligence Service, in Halhoul. Programs preparer for Palestine TV, Sameer Skaik, was summoned and questioned by the Internal Security in Gaza, twice, for long hours. The Palestinian Intelligence Service seized a money transfer of the staff salaries for the Jordanian office of “Al-Haqiqa TV” in Bethlehem. Journalist Nidal Ishtaya was injured with stones while covering a demonstration in Kafr Qaddoum.

The Israeli Attacks:
Israeli occupation forces have committed a total of 32 attacks, most of which involve serious attacks against the lives of journalists and media freedoms, including numerous attacks involving groups of journalists, and complex attacks, which include several different attacks integrated all together.

Among the most prominent and serious Israeli attacks registered during the last month of 2018, is the injury of at least 9 journalists by metal and rubber-coated metal bullets, as well as gas bombs which the occupation soldiers continue to directly and deliberately fire at journalists.

Journalist Attiya Mohammed Ali Darwish, while he was covering the events of the peaceful return march on December 14, 2018, in the area of “Carney” –Gaza, was injured by a gas bomb which had hit him in the face and penetrated the bone of his face by 7 cm, causing bleeding and damage to his jaw and left eye.

Among the most prominent Israeli attacks monitored during the month of December, in addition to the aforementioned nine injuries, is breaking into the main headquarters of the Official Palestinian News Agency “WAFA” by the Israeli occupation forces, detaining the staff members inside the headquarters, and throwing a gas bomb at the balcony of Al-Tahrir Hall, even though 14 staff members were inside the headquarters at the time. This is in addition to breaking into Al-Noor printing shop in Ramallah by the Israeli occupation forces and bombing its doors at night as well as confiscating its equipment and printing machinery. The owner of the shop, Khaled Hussein Musfir, estimated the total price of the confiscated equipment and machines at 32,000 shekels.

To see the details of each attack: Palestinian Center for Development & Media Freedoms