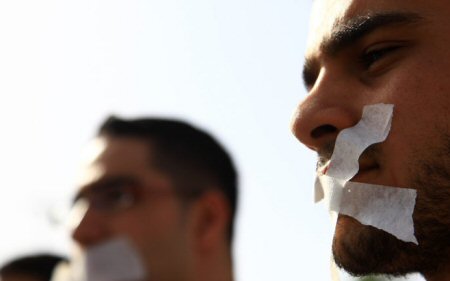 Palestinian student organizers respond to backlash: ‘if we irritated some people then we did our job.’

On May 16, 2018, Palestinian students at Jerusalem’s Bezalel Academy of Arts and Design set up a memorial for the 61 protesters slain in Gaza on Monday. Organizers displayed the names and ages of each of the killed in Arabic on a piece of black paper in the school’s hallways.

The students planned the memorial in a private Facebook group, according to Israeli newspaper Yediot Ahronot. “There are many people who don’t know what is going on in Gaza and don’t know how many people were killed. So we reminded them,” one of the organizers told Yediot. “All of us are Palestinians. We are all together and this is the only way that we are able to make our voice heard,” said another. The organizers chose to remain anonymous in media interviews.

Later that day, a student ripped the posters off of the wall. The right wing Israeli student organization Im Tirzu captured the action on video. Onlookers in the video can be heard saying, “freedom of speech has gone too far at Bezalel.” Responding to the removal, one of the Palestinian organizers told Yediot, “if we irritated some people then we did our job.”

Bezalel responded by saying: “Bezalel Academy is a protected space for free speech in Israel, and it is possible for students to engage in open dialogue, as well as critical and creative discourse about the different issues that concern them.” A student quoted by Israeli newspaper Walla! expressed similar sentiments, stating that the banners and the responses to it opened up space for students to speak about what is going on in Gaza.

The head of Im Tirzu at Hebrew University celebrated the student who pulled down the memorials. “Instead of bringing a janitor to clean up the incitement and punish the student, now we have a cloud of joy,” he told Yediot. On Thursday, students affiliated with Im Tirzu put up signs labeling the organizers of the memorial as members of Hamas and calling the Nakba “fake”.

Israeli politicians derided the memorial put up by the Palestinian students. Mayor of Jerusalem Nir Barkat responded by blaming Palestinians victims and demanding censorship on Twitter: “I was shocked to see on the walls of Bezalel the names of terrorists that were injured when they tried to break through the border fence in Gaza in order to hurt Jews. There are borders and a clear red line that shows how freedom of expression can be used cynically. I demanded from the leadership of Bezalel that they remove the signs and ban such provocations.”

Speaker of the Knesset Yuli Edelstein told Yediot, “freedom of expression is a supreme value in my eyes but a person and an artist should know how to set boundaries for himself. I would remind the students protesting to remember that Israeli soldiers on the border of the Gaza Strip are also protecting them.”

Member of Knesset (MK) Pnina Tamano-Shata (Kulanu) told Walla!, “before we even address the arguments and criticism of the anti-Zionist and anti-Semitic BDS movement, it is necessary to recognize the work that is in front of us in the House of Israel [sic]: all the respected academic institutions abuse freedom to incite against soldiers in the IDF [sic] in the name of freedom of expression and under the guise of humanitarianism.

MK Hanin Zoabi (Joint List) praised the efforts of the students while critiquing the general silence in Israeli academia surrounding the massacres in Gaza: “The atmosphere of openness at Bezalel diverges a bit from the view of Israeli academia, which has been silent in a thunderous and terrifying manner against the cruel massacre. It is a poor reflection on Israeli academia that only Palestinian students, without the presence of Jewish students or lecturers, found a logical way to protest against the horror of the mass murder in Gaza.”

In response to the memorial at Bezalel, Science, Technology and Space Minister Ofir Akunis has barred Bezalel students from submitting work to an international science conference this month in Jerusalem. ”

The controversy at Bezalel came one day after Dr. Lina Salaimeh, a lecturer at the Tel Aviv University Law School, informed her students she would be canceling class to observe the general strike taking place across Palestine – a move that drew outrage from Israeli media outlets.

Bezalel removed a poster display hung by a student in its hallways in 2016. Those posters depicted the Prime Minister Benjamin Netanyahu with the word “rope” underneath and an image of a noose superimposed onto him in the style of the iconic “hope” poster of U.S. President Barak Obama. Police questioned the student, but closed the investigation two months later.

Corey Sherman is a teacher in Washington D.C. and contributing editor to aicnews.org.