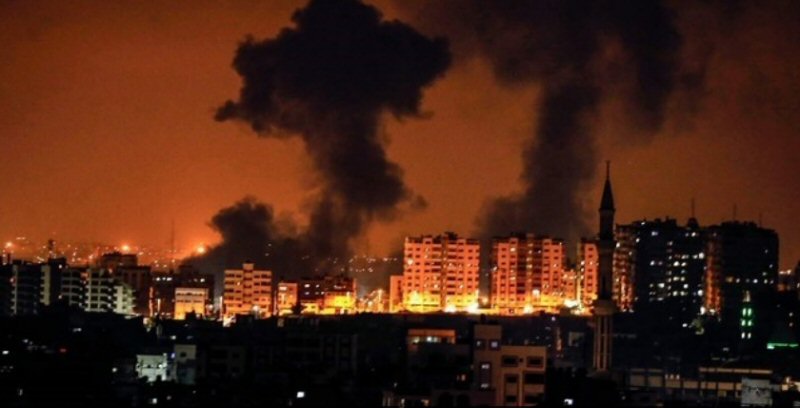 by Rana Shubair, author of In Gaza I Dare to Dream.

“Mom, do they bomb residential buildings?, asked one of my daughters in fear. And my response again came in the form of a lie: “No, habibti. They don’t. Don’t be scared.” I stroked her cheek to reassure her.

As a parent, what can I do? I wasn’t sure if there would be other buildings whose residents would receive horrifying calls in the middle of the night to evacuate and run for their lives. It happened before in the bloody 2014 aggression when a thirteen story building was evacuated and leveled to the ground by F-16 missiles. In a matter of seconds, over 50 families lost their homes and all their possessions.

The narrow streets of Gaza are packed with apartment buildings with no space dividing them in many places. This was the case with Al-Yazji building which was targeted by an F-16 with at least two rockets on November 14, 2018.

As I walked down that street every day, I was unaware that this building would soon day be a target of Israeli F-16s. It was four in the morning and the escalation was in full swing.

November 14, 2018, I was in bed in a useless attempt to sleep. Two hours passed without any aerial shelling giving me a sense of temporary yet cautionary calm. My kids managed to sleep until they all suddenly flung out of their beds when they heard the huge explosions.  The target was Al-Yazgi building. I remember that it had a kindergarten and used to see kids being led by their teachers off and on the bus and parents coming to pick their kids up. I also remember a store that sold fancy decorative ornaments and a women’s clothes shop beside it.

Now, as I go down that same street, the area is cordoned off for debris removal works. It’s not easy to clear off a six-story building that housed at least six families and other institutions with all the furniture, appliances, equipment, etc…

I’ve learned that is life precarious, but to just have  your whole life turned upside down because another human being decided to bomb your home suddenly is too extreme to fathom.

After losing so many loved ones, over and over in a repeated vicious cycle of Israeli occupation tyranny and aggression, what is the choice for the Palestinian people? Just as the sun keeps shining every morning, we will go on living. We will continue to call for a life of freedom and dignity. We will continue to call for our legitimate rights to live as other humans around the globe do. We may not live to see the change, but at least when our children look back, they will know that all our efforts paid off in the end.