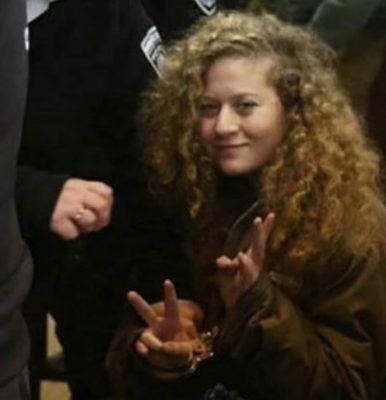 World-renowned Palestinian teen journalist, nonviolent activist Ahed Tamimi, 17, from Nabi Saleh village northwest the central West Bank city of Ramallah, has reached an agreement with the Israeli Military prosecution, to which she will be sentenced to eight months in prison.

The court also sentenced Nour’s cousin, Nariman Tamimi, to sixteen days of time served, and 2000 Shekels fine ($575), before being released.

Israeli daily Haaretz said that Ahed would be pleading “guilty” to what was described as “four counts of assault” against the soldiers, who were invading her town, and attempting to break into her home in December of last year. One of the counts was the videotaped incident when she slapped an invading Israeli soldier.

Haaretz added that, although was plea agreement was reached, it remains not final until the military court approves it.  If the agreement is finalized, ‘Ahed will be held in detention for five more months.

Haaretz stated that the decision was made, Wednesday, in a hearing which was held behind closed doors, after the court denied an appeal for holding the hearings in public.

It added that the original indictment which was brought against ‘Ahed contained twelve charges, including from the year 2016.

The charges included what was described as “five counts of assaults against the soldiers,” “throwing stones,” “disrupting a soldier,” in addition to “incitement and throwing objects.”

‘Ahed’s father and Nariman’s husband Bassem Tamimi, said that he was only able to visit with his wife and daughter in prison last week for the first time since they were abducted in December of 2017.

He said that ‘Ahed enjoys high spirits, and spends her time reading books, and studying for school, with a special focus on the English language.

Bassem denounced the military measures in court, especially preventing the journalists from attending and holding the hearings behind closed doors.

Gaby Lasky, the defense attorney representing ‘Ahed, said the plea agreement, which included dropping all counts of the indictment that made her imprisonment possible until all legal proceedings are over, is a proof that Ahed’s abduction and the legal proceedings brought against her are all “steps meant for settling scores,” Haaretz said.

It is worth mentioning that on December 15th 2017, Israeli soldiers shot Ahed’s cousin, Mohammad Tamimi, only fifteen years of age, with a rubber-coated steel bullet in the face at close range.

Mohammad’s treating physician told DCIP that the 15-year-old underwent two operations to remove the rubber-coated metal bullet, which lodged in the back of his skull and caused severe bleeding in his brain. The child’s 16-year-old cousin, Ahed Tamimi, was detained days later in a night raid.

On February 26th 2018, the wounded child, and nine other Tamimi family members, mainly children, were abducted by the soldiers who carried a dawn invasion into Nabi Saleh, and conducted extensive and violent searches of homes.

A military court sentenced, on Wednesday, Ahed Tamimi, 17, and her mother, Nariman, 42, to eight months in prison plus $1500 fine for each, following a plea bargain between the Tamimis’ lawyer and the military prosecution, according to people at the trial held at Ofer military camp, near Ramallah.

Ahed Tamimi was arrested in December, when she was only 16 years old, and charged with slapping an Israeli soldier who invaded her family home in Nabi Saleh village, near Ramallah. The mother, Nariman, was arrested on the same day for filming the incident and placing the video on the internet and therefore charged with incitement.

The two Tamimis have had almost 10 court hearings since their arrest, as the defense lawyer and the military persecutor were battling over their case, according to WAFA.

Ahed Tamimi has become a household name and an icon of passive Palestinian resistance. A number of international human rights organizations have condemned her arrest and called for her immediate release.

The Ofer military court had earlier agreed in another plea bargain to consider the 16 days Ahed Tamimi’s cousin, Nour, 20, had spent in prison after she was arrested, a day after Ahed, for also appearing in the same video fending off the soldiers from their house, as her sentence and fined her $600 plus five months suspended sentence.