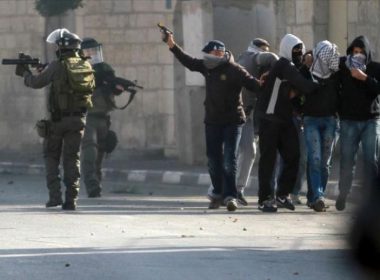 Israeli soldiers invaded, on Wednesday morning, the al-Mughayer Palestinian village, east of the central West Bank city of Ramallah, before storming into a school, and a kindergarten, and injured eight, in addition to abducting three young men.

The principal of al-Mughayer Secondary School and member of the village’s Local Council, Marzouq Abu Naim, said the soldiers invaded the local school for girls, and used it as a military post, in addition to the al-Mughayer kindergarten.

He added that the soldiers also invaded and searched many homes in the village, and the local mosque.

The soldiers also fired many gas bombs, causing dozens of Palestinians, including children in the kindergarten, to suffer the effects of teargas inhalation.

Naim Abu Ata, the head of the Local Council, said undercover soldiers also infiltrated into the al-Mughayer School for Boys, assaulted ten students with clubs and batons, and abducted three.