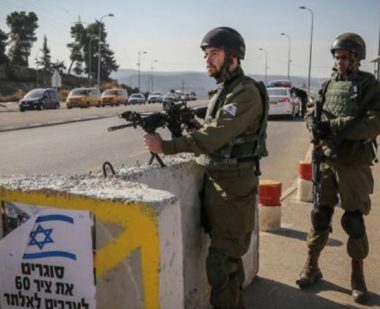 Israeli forces, on Saturday evening, raided a number of homes and terrorized residents in the city of Tulkarem, northern occupied West Bank, in a step seen as a collective punishment measure against the city’s population, according to witnesses.

Beginning this morning, the Israeli army set up checkpoints at all of the city’s entrances and side roads, stopped cars, interrogating the occupants and turning them back, preventing them from leaving the city to reach their places of work and study.

For almost a month, the city has been targeted, almost daily, with raids and searches by the Israeli army, under the pretext of pursuing Ashraf Na’alweh, 23, the main suspect in the killing of two Israeli settlers in the illegal Israel settlement of Barkan, on October 7.

Furthermore, WAFA reports, the army has distributed leaflets to the residents, warning them against hiding Na’alweh and demanding he be turned in. Na’alweh’s parents and sisters have been under constant harassment, by the army, ever since the incident.

Na’alweh’s mother, Wafaa, is currently detained in Israel, along with his sister, Fayrouz, 35, and brother, Amjad, 33. The three were arrested in an attempt to pressure Ashraf to turn himself in, after all previous attempts to apprehend him have failed.