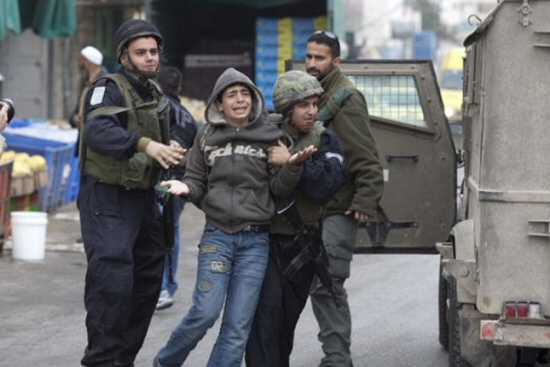 The Israeli parliament of the Knesset passed a bill into law, on Wednesday, which permits the imprisonment of children under the age of 14 if the child committed acts of “terrorism,” according to a statement released by the Knesset.

The legislation, labeled the “Youth Bill,” would allow Israeli authorities to imprison a child if convicted of “terrorism” against Israeli civilians or military personnel.

The statement said, according to Ma’an News Agency, that Israeli courts were now permitted to “set discussions regarding the imprisoned juvenile while he or she is being held at a close facility,” and that during the discussions the courts “will be allowed to postpone the convicted minor’s transfer date from the closed facility to a prison, shorten the convicted minor’s prison sentence or cancel the prison sentence.”

The bill, which was first introduced by Knesset member (MK) Anat Berko, was passed after 32 MKs voted in its favor, while 16 MKs voted against the legislation, and one abstained.

“This law was born of necessity,” Berko was reported as saying. “We have been experiencing a wave of terror for quite some time. A society is allowed to protect itself. To those who are murdered with a knife in the heart it does not matter if the child is 12 or 15.”

The law is intended to punish primarily Palestinians from occupied East Jerusalem who attempt attacks on Israeli civilians and military. Palestinians of all ages from the occupied West Bank, including young minors, have long been tried, sentenced and detained in Israel’s military court system.

In the report, ACRI details the importance of Israel’s Youth Law, which prohibits children under the age of 14 from being imprisoned as it can cause significant harm to a child and is likely to increase violence and crime in broader society. The group instead proposed that the Israeli government initiate programs that could support the integration of minors accused of wrongdoing back into Israeli society.

The “Youth Bill” is one of several laws which have been passed over the last year targeting Palestinian minors and fast-tracking the imprisonment of Palestinian youths.

In July 2015, legislation was passed in the Israeli Knesset allowing sentencing for up to 20 years for someone convicted of throwing stones at vehicles if intent to harm could be proven. However, the law allows the Israeli state to imprison someone for up to 10 years without proof of intent.

In November, Israel established legislation allowing the sentencing of Palestinians to a minimum of three years in prison for the act of throwing a stone at an Israeli. Included in the legislation were provisions allowing Israeli authorities to strip stone throwers of their state benefits and canceling access to national health insurance and social services for the families of the accused.

According to ACRI, proposals are also under way to allow Israeli authorities to hand down life sentences to children under the age of 14.

Defense for Children International – Palestine (DCIP) condemned the legislation against stone throwers, saying that the group was “deeply concerned that these changes to the Israeli penal code and policy guidelines will continue to target Palestinian youth.”

“These changes are almost exclusively applied to Palestinians. Israeli extremists and settlers are rarely prosecuted under the same standards of the law,” the group added.