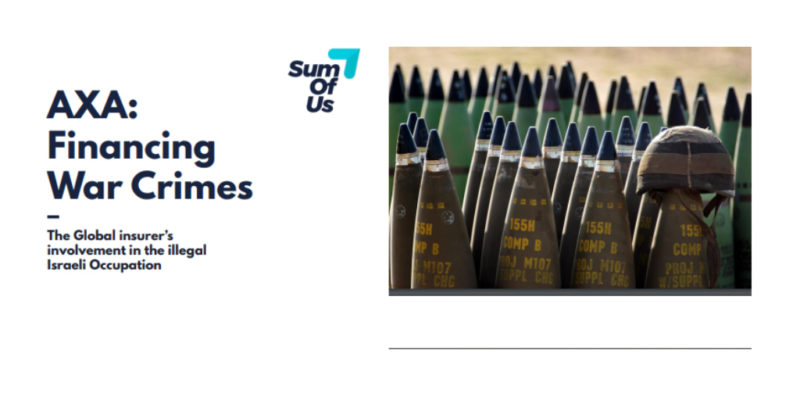 In a report published today, the US corporate watchdog SumOfUs documented that the French insurance giant AXA is investing over $91 million in Israel’s five largest banks and Israel’s largest private arms manufacturer, Elbit Systems, all companies directly involved in Israel’s war crimes against the Palestinian people.

A growing global coalition responded to the report findings today by pledging more protests, and launching an online campaign expected to deliver thousands of emails to AXA’s CEO, calling on AXA to respect international law and divest from the complicit Israeli companies.

“As long as these companies support the expansion, construction and maintenance of the illegal Israeli settlements and associated infrastructure, in addition to the unlawful use of armed force against Palestinians, AXA’s investments will make it complicit in serious violations of international law, potentially guilty of French law violation, and definitely in contradiction with its responsible investment policies.”

“Israel can only maintain its regime of occupation and apartheid over the Palestinian people through support from governments and companies such as AXA. As long as AXA maintains its investments in these Israeli banks and Elbit Systems, protests by our growing global coalition will intensify. With Israel and the US, with the European Union’s complicity, plotting to undermine Palestinian rights to justice, freedom and self-determination, it’s even more vital that principled civil society coalitions hold complicit companies such as AXA to account.”

Over the last year, the Coalition to Stop AXA Assistance to Israeli Apartheid, which has grown to include groups in nine countries in Europe and the Arab world, has organized coordinated days of protest outside AXA offices, a protest outside of AXA’s annual meeting in Paris, and other actions.

An insurer should protect lives. Instead, AXA is profiting from the destruction of Palestinian lives and livelihoods. Palestinian civil society has called on companies to cut ties of complicity with companies directly involved in Israel’s violations of Palestinian human rights. To meet its obligations to respect international law, AXA must divest, following the lead of investors like the Presbyterian Church USA and the United Methodist Church (UMC), the Dutch pension fund PGGM and the Norwegian, Luxembourg and New Zealand governments.

The five Israeli banks that AXA invests in – Bank Hapoalim, Bank Leumi, Mizrahi Tefahot, Israel Discount Bank and First International Bank of Israel – all provide “direct and substantial” support to the maintenance and development of Israel’s illegal settlements in the Occupied Palestinian Territory, according to reports by Human Rights Watch and the Israeli research organization Who Profits.