Remembering the 2014 Israeli Offensive against Gaza 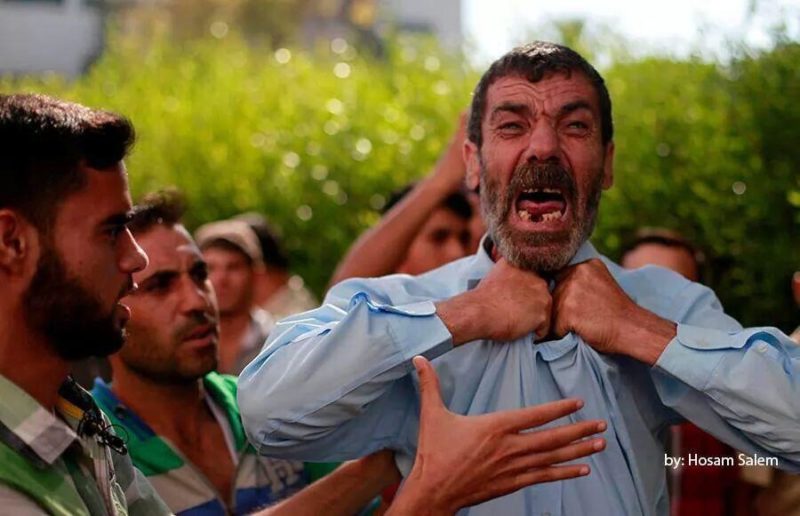 On this day, five years ago, the Israeli occupation launched one of its deadliest military offensives against the Gaza Strip in recent history. The conflict left 2,251 people dead, with more than 11,000 wounded, according to Palestinian and UN sources. Five years on, Gaza is still subject to intense attacks by Israel as well as the ongoing blockade which has been enforced for more than 11 years.

What: 2014 Israelis offensive against Gaza

Where: The occupied Gaza Strip

The Israeli military offensive on the Gaza Strip took place against the backdrop of a second Palestinian unity government being formed in early June by the Islamic Resistance Movement — Hamas — in the Gaza Strip and the Palestinian Authority in the West Bank. Threatened by the reconciliation between the two main Palestinian factions, Israeli Prime Minister Benjamin Netanyahu warned that the PA had to choose between peace with Hamas and peace with Israel.

Ten days later, on 12 June, three Israeli settlers went missing in the West Bank, an incident for which Israel blamed Hamas, despite providing no evidence to back the allegation. Netanyahu also stated that the kidnapping proved that the unity pact between the Palestinian factions could not be endorsed.

High ranking Hamas officials denied involvement and the PA attributed the abductions to the Qawasameh clan, a group within Hamas that has frequently acted against the party’s policies. Israeli historian Ilan Pappé has said that the motivation for the kidnapping was the murder of two Palestinian teenagers by Israeli forces in May 2014; the autopsy report which showed that the teens were killed by Israeli soldiers’ live fire had been made public the day before the kidnapping.

In the aftermath of the abduction, Israel launched a crackdown on alleged Hamas associates in the West Bank. Some 11 Palestinians were killed and dozens were wounded in the run up to 2 July, with hundreds arrested, many of whom had been freed in the Gilad Shalit prisoner exchange deal. The murder of a Palestinian teen by Israeli settlers then sparked widespread protests in the occupied territories. Israel also bombarded the Gaza Strip, prompting some minor rocket fire from various factions in the besieged enclave.

After attempts to agree to a ceasefire failed, with Tel Aviv refusing to meet Hamas conditions that the siege be ended and prisoners released, on 7 July the Israeli military announced the start of Operative Protective Edge to “hit Hamas hard”.

Within the first 48 hours of the operation, Israel dropped 400 tonnes of bombs on Gaza. Over the next two months, some 6,000 air strikes were launched on the besieged 365 km2 of the coastal territory.

The subsequent bombardment displaced some 500,000 people; 300,000 civilians were forced to shelter in UNRWA schools. Electricity to hospitals was cut off, rendering thousands without basic medical care.

Hamas fired rockets towards Israel in response, but did little damage. Lacking in precision guidance systems, the attacks were indiscriminate by default, but Hamas has said on many occasions that its rockets are always intended to hit military targets. Conversely, Israel used its high-powered US-financed precision-guided arsenal to target civilian areas deliberately, claiming that militants were hiding in homes, schools and hospitals.

Israeli army also began a limited ground invasion, focusing on destroying tunnels used to transfer much-needed humanitarian supplies to the besieged population. The tunnels have been described as “Gaza’s lifeline”.

The offensive prompted outrage from the international community, with protests organised around the world in support of the Palestinians.

On 3 August, the army pulled most of its ground forces out of the Gaza Strip after completing the destruction of 32 tunnels. A week later, a three-day truce negotiated by Egypt came into effect, which led to a series of brief ceasefires, before Israel and Hamas agreed to an end to hostilities on 26 August.

The “Gaza War” has had enduring consequences for the Strip’s two million inhabitants. Over 2,250 Palestinians were killed, 500 of whom were children, and 11,000 were wounded, placing a huge strain on the already severely stretched medical sector.

Moreover, at least 20,000 buildings were destroyed in the Israeli bombardment, either reduced to rubble or rendered uninhabitable, including mosques, churches, hospitals and schools. Pierre Krähenbühl, the Commissioner-General of UNRWA, appealed for £178 million ($295 million) in international aid towards its recovery operations, but little of the planned reconstruction has been completed.

The Israeli death toll was 67 soldiers and six civilians by the time of the ceasefire.

The UN affirmed in 2015 that Israel committed war crimes during the offensive due to its targeting of civilians areas. Israel had refused to co-operate with the UN investigation, which it claimed had drawn its conclusions in advance. The report supported the Palestinians in the filing of a petition to the International Criminal Court (ICC), which has yet to open a full investigation into the allegations, despite dossiers of evidence reportedly having been provided by the PA.

A two-year investigation by Israel’s official watchdog into the operation also revealed last year that the government failed to explore diplomatic solutions to prevent the seven-week conflict. The 200-page report also criticized the Netanyahu government for ignoring several warnings by security services that the ongoing blockade in Gaza was escalating tensions and could lead to violence if not relaxed.

Five years down the line, Al Ray further reports, the Palestinians in Gaza continue to be subject to Israeli brutality, as demonstrated most recently during the Great March of Return protests since the end of March. At least 2017 people have been killed by Israeli forces, including children, medical personnel and journalists. A senior Israeli official tweeted: “Nothing was uncontrolled; everything was accurate and measured and we know where every bullet [fired by Israeli snipers] landed.” Campaigners believe that this alone is enough to see Israeli military personnel charged and convicted of war crimes.