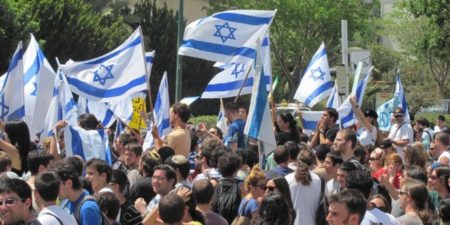 Adalah said that the the course, which was created by Israeli education authorities, “requires students to watch a series of videos after which they must take a multiple-choice exam, the correct answers of which promote racist ideology”.

Students are told that “anti-Semitism in Europe increased with the immigration of Muslims to Europe… from the Middle East, Africa, Pakistan, Afghanistan.”

“The course presents a racist ideological perspective that creates an equivalence between Palestinian, Arab, or Muslim identities and violence and terrorism,” Adalah has stated, adding that “Palestinian Arab high school students in the Israeli school system are being asked by this exam to assimilate its racist values.”

Adalah attorney Nareman Shehadeh-Zoabi wrote to the Education Ministry demanding that the ministry “immediately cancel the mandatory course and exam and allow students to freely participate in overseas school trips with the start of the 2019-2020 school year”, after a school in Nazareth decided to cancel an exchange programme to Sweden instead of allowing its students sit the test which “promotes racist propaganda”.  The letter was written on behalf of Masar Association and the parents of children studying at the association’s Nazareth school.

Shehadeh-Zoabi noted, according to the PNN, that “[Palestinian Arab teenagers] are being forced to internalise humiliating statements about themselves and their families”, which is “outrageous and illegal, adding that “Adalah will take all necessary steps to abolish this course that is repugnantly offensive to Arab citizens and students.”