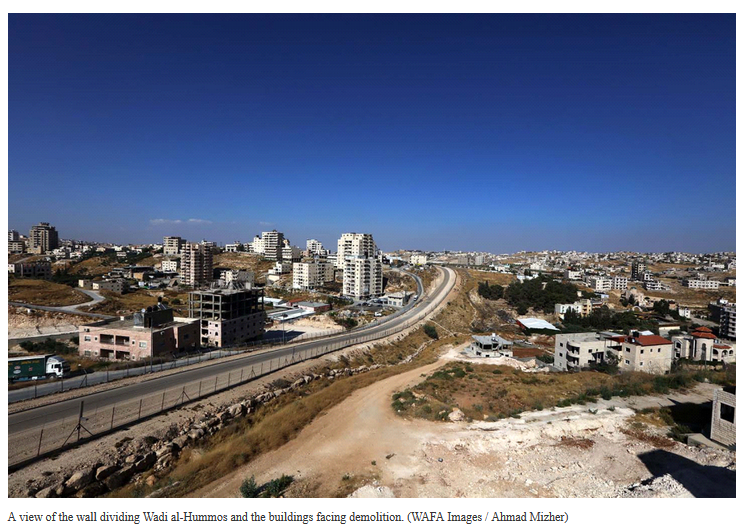 BETHLEHEM, Monday, July 08, 2019 (WAFA) – By Anan Shehadeh: In 2005, precisely when the Israeli authorities began building the apartheid wall in Jerusalem and Bethlehem areas, the suffering of the residents of the Wadi al-Hummos, an area part of Sur Bahir, a Palestinian neighborhood southeast of the occupied city of Jerusalem, began to surface and gradually worsen.

The neighborhood, which is about 6000 dunams in area, was divided into two parts when building the wall was completed, with half of it being inside the wall, that is on the Jerusalem side, and the other half outside it that remained part of the West Bank, which is an area that reaches its borders from Sur Baher to Beit Sahour and other nearby villages in the Bethlehem district.

Last month, Israel decided to demolish 100 residential apartments on the West Bank side of the wall claiming they were built too close to the wall. It gave the resident until July 18 to evacuate the area.

The head of the services committee in Wadi al-Hummos, Hamada Hamada, said that the land where the buildings are located is under the jurisdiction of the Palestinian Authority (PA) as defined in the Oslo Accords which classified the West Bank into areas A (under PA rule), B (joint PA, Israeli rule) and C (full Israeli control).

Hamada told WAFA that 6000 people live in Wadi al-Hummos and with the urgent need for urban expansion, residents of Sur Baher started to expand and built homes on their own land. However, with the construction of the wall and dividing Sur Baher land and people, problems began to surface with Israel issuing halt construction orders and threats of demolition.

Hamada said the Israeli municipality of West Jerusalem would not provide them with services and at the same time refused to acknowledge that this land was under PA control. Whenever they asked for services, the municipality would tell him to go and get it from the PA.

“All the buildings have legal permits by the local government in Bethlehem,” he said, pointing to the poor conditions of life because of the absence of infrastructure from sewage network, water and even roads and the chaos of the construction process.

Hamada noted that many people are threated to have their Israeli IDs revoked and thus prevented from receiving medical services in Israeli hospital, stressing that many of the citizens are facing serious difficulties in registering their children in their personal IDs, and that there are a number of young men, boys and children, including those over the age of 22, who are still without civil documents.

“My daughter is three years now and she is still without legal documents. She has only a birth certificate without a number,” he said.

“There is a clear policy of emptying the area in order for it to be an extension of the surrounding settlements. I personally pay NIS $600 for national health insurance, as it is required in Israeli law, but I do not receive any services in return.”

Hamada pointed out that the people of Sur Bahir are Palestinian refugees who have UN cards and therefore it is necessary to protect them and not to displace them again, stressing that the demolition decision orders the owners of buildings and facilities to demolish them by themselves. If not, Israel will demolish them at their expense, which sometimes can cost up to $30,000.

He added that the danger lies in the fact that if the 100 apartments are demolished, the same thing will happen to the buildings in other areas and thus the displacement of more than 6000 citizens from their homes and land, meaning it could be the largest migration since 1967.

The governor of Bethlehem Kamel Hamid called for an action plan to thwart all the Israeli measures in the region.

“We all have to work together to reduce settlement ambitions in the region, especially Bethlehem, in general, “ he said. “It requires focusing on the legal side as well as providing all forms of aid and assistance to the population from water, electricity and infrastructure through a joint committee to ease the damage they are expected to face.”

He pointed out that there should be a clear understanding on a program of peaceful resistance in terms of setting up tents for protesting and expanding popular participation, as happened in Khan al-Ahmar, stressing that Bethlehem has recently been subjected to a raging settlement attack and repeated incursions.

The director of the office of the Wall and Settlements Resistance in Bethlehem, Hassan Breijieh, told WAFA that Wadi al-Hummos area attracted residents of Jerusalem who wanted to escape the difficulty of life under Israeli law there.

He pointed out that the demolition decision was issued by the Israeli Supreme Court at the recommendation of the Israeli army, noting that no clashes or any other military confrontations ever happened in the area. In fact, it was the Israeli forces who committed a crime against a young man from Hebron when they shot him while trying to reach Al Aqsa Mosque to perform Friday prayers in the Islamic holy month of Ramadan.

Breijieh said the area has been quiet but there are attempts by the Israeli forces to create a state of tension there in order to cause confusion and implement plans of demolition of houses and justify the construction of the wall for “security reasons,” pointing out that the wall is illegal and causes harm according to international tribunals on the matter.

He said that a tent will be set up in the area outside the wall and will be used for solidarity purpose, adding that the area was chosen because it can easily be reached by individuals and delegations.

The director general of local government in Jerusalem, Musa al-Sha’er, said that a service committee in Wadi Al-Hummos was established in 2018 in order to provide services and be the authorized party to deal with the official authorities.

He pointed out that the granting of building permits in the region is still ongoing and it is the job of the PA, and that there are projects to be implemented in the coming period that include rehabilitation of the streets and the establishment of drinking water pipes. The local government gives $15,000 monthly to the Services Committee as operating expenses and to strengthen stability.

He explained that the area belongs administratively to Jerusalem, but at times the Local Government in Bethlehem was given the right for granting building permits.