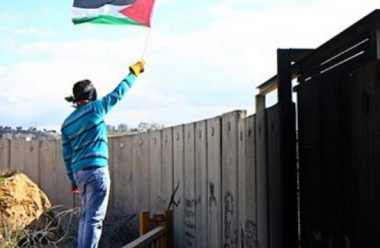 Dozens of Palestinians, including Israeli and international peace activists, conducted the weekly nonviolent protest in Ni’lin village, west of the central West Bank city of Ramallah, marking the 35th anniversary of Sabra and Shatila Massacre.

The nonviolent protesters marched towards illegally confiscated Palestinians lands, which Israeli took over for the construction of the Annexation Wall, in the southern part of the village.

They carried Palestinian flags and chanted for national unity, and for holding Israel accountable for its crimes and escalating violations.

Mohammad Amira, a member of the local Popular Committee against the Annexation Wall and Colonies, thanked all Israeli and international peace activists who participate in the ongoing Palestinian struggle for justice, liberty and independence.

Amira also called on the international community to ensure the Palestinians receive the urgently needed protection, and also called for stepping-up the efforts to pressure Israel into ending its crimes, its occupations and its dangerously-escalating illegal colonialist activities.