Now You See It, Now You Don’t: A Young Palestinian Magician’s March to Fame 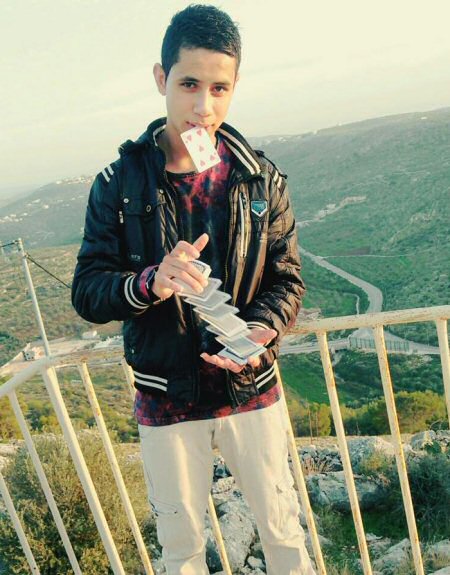 Ammar Faqih, a promising young Palestinian magician, doing one of his card tricks at his Tullkarem home. (Photo courtesy of Faqih.)

Ammar Faqih may be just 17 years old, but he can  do tricks magicians have spent many years trying to master.

One day, Faqih entered a clothing store in his Tulkarem hometown, north of the West Bank, and challenged the shop owners that he can change cloths in just three seconds.

To the surprise of the owners, he did, and the video posted on social media of this trick had 3.3 million views and over 2,000 comments, all saying they were impressed by his act.

Faqih started doing magic tricks at a young age as a hobby to impress his family and friends. But now, he is performing in local events to people of all ages. He hopes that one day, and soon, he can reach wider audiences around the world.

The young and promising Palestinian magician has always had passion for fame. He tried out several talents and skills in order to stand out. Eventually he found interest in doing magic tricks.

When was still young, he practiced Parkour, a training discipline where those who practice it should move from one point to another without any equipment and in the fastest way possible, something that Faqih found hard to keep up with and eventually abandoned.

After Faqih saw how much impressed his mother, whom he says has had the biggest influence on him, was with a magic show they were both watching on TV, he started practicing doing simple magic tricks.

“I still remember my mother’s comments on the magician and how much people loved him,” he says. “I thought it should be me doing a similar show in order to impress everyone and achieve fame and popularity.”

At first, he wanted to impress his young siblings by doing simple tricks such as having a walnut in his hand, putting in his mouth without anyone noticing , then pretending it has disappeared from his hand. Then, he started doing basic tricks with cards in front of family and friends before he took this matter more seriously and started to read about it and learn tricks online while exploring the world of magic tricks, which eventually led him into developing and even inventing his own tricks.

Unlike his family and loved ones who offered him a lot of support, his friends mocked him for thinking he could go anywhere with his tricks. That stopped after he made his first TV debut for a local channel in 2014.

That TV show made him famous at home as people in the street would stop him and ask him to perform tricks for them.

Faqih described his “clothes changing” trick as one of his favorites. He said he worked hard to develop and perfect it.

But, Faqih is aware that with success, comes criticism. He says he welcomes criticism only when it is constructive and aims to improve his performance and techniques.

“I ignore unconstructive criticism that aims only to dampen my enthusiasm,” he says. “And I ignore all the negative comments I receive online about my work and would only accept constructive and positive reviews that help me improve my act.”

Faqih says any person with talent in a certain field needs to be artistic and clever. To do magic tricks, he says anyone that practices it needs to be sharp, smart and, most importantly, has the right tools.

Thanks to his intuition, he was successful in catching people’s attention and in impressing his audience even when he was performing the simplest tricks of all, making him one of the promising young talented Palestinian magicians.

Faqih says that he had a hard time in school, when it came to studying, which sometimes got him in trouble with his parents who wanted him to study better and score higher grades. It wasn’t until the 10th grade that Faqih took his studies seriously, but that also was the time his passion for doing magic tricks had begun.

He says that he continuously asked teachers to let him perform tricks to his fellow students between classes, something that was widely welcomed by the principal of his high school, al-Fadiliya. He said the principal always supported his talent and allowed him to perform in school activities as long as it did not interfere in his studies.

Just like any person who is passionate about something and wants to learn as much as possible about it, Faqih isn’t without an idol he looks up to and hopes to one day be like that person. He cites English magician and card sharp Drummond Money-Coutts as his favorite magician and inspiration, saying he likes his techniques when performing tricks and aspires to achieve as much as him and even more someday.

Nowadays, Faqih performs in local events in his hometown and in other cities in the West Bank. He plans to post videos online with new magic tricks now that he has more free time after he finished high school.

As for his future plans, he hopes to participate in the next season of Arabs Got Talent, MBC’s hit talent show, where he says he plans to perform a surprising trick he never performed before, promising to represent his country Palestine in the best way possible.