Nurse in Gaza: “We had no choice but to lay patients on the ground.” 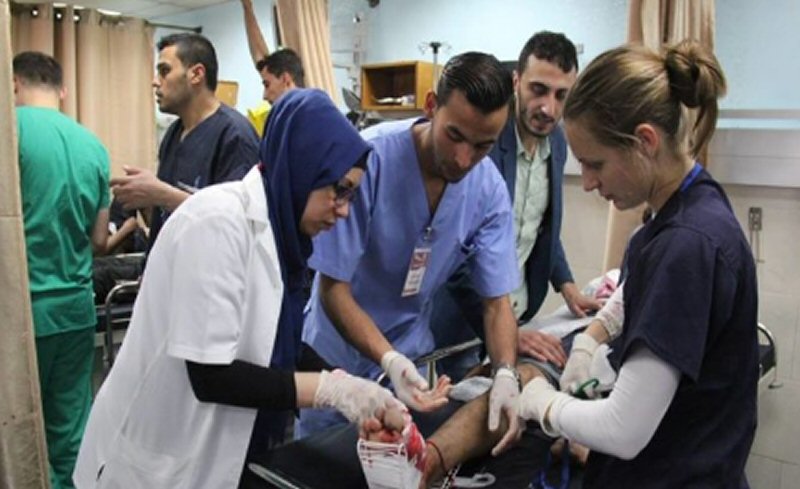 Sarah Collins has just completed her first mission with the International Committee of the Red Cross (ICRC). The emergency department nurse from Woodbury, in Devon, reflects on her time in Gaza.

I don’t think I will ever forget May 14, 2018. I have worked as a nurse for 13 years in many different settings and I didn’t think there was much left that could shock me.

“I began to realize my mission might be quite different from what I anticipated.”

I had arrived in Gaza less than a month earlier. My job description was to support and train emergency department staff to improve trauma care – a ‘hands-off’ role – but, things didn’t exactly turn out that way.

A few weeks before I was due to travel to Gaza, the first ‘Great Return March’ took place. The subsequent violence resulted in more than 700 people suffering gunshot wounds, in the border areas, and the health service was taken completely by surprise.

Suddenly, Gaza dominated the headlines, once more, and I began to realize my mission might be quite different from what I anticipated.

I was thrown into it as soon as I arrived – spending each Friday of my first few weeks in the emergency departments of different hospitals, helping the local staff to manage the influx of mass casualties.

We knew in advance that May 14 was going to be big, but no one could have predicted quite how bad it would be. Everyone was on high alert, at the hospital.

It was a trickle, at first, but that soon became a steady stream. Patient after patient – mostly young men, but there were older people and women, too.

“Soon, we began to run out of beds. An emergency donation was made, but it didn’t last.”

Almost all had gunshot wounds to the legs. We moved from patient to patient, doing what we could – mostly packing wounds, splinting fractures, applying makeshift tourniquets and starting intravenous fluids.

We picked up shattered limbs and tried, over and over, with endless packets of gauze and bandages, to stop the bleeding. At the same time, I knew that many legs were past saving.

Out of the corner of my eye, I noticed the critical cases – those with gunshot wounds to the chest, or the head, being whisked through to the resuscitation room.

The number of patients kept increasing. Soon, we began to run out of beds. An emergency donation was made, but it didn’t last.

Before long, we had no choice but to lay our patients on the ground, and kneel beside them, to treat them. The numbers quickly threatened to overwhelm us. Each patient was accompanied by family or friends, and the small department became desperately overcrowded.

After some hours, we were pulled outside, through the crowds that had gathered, and we sat on a bench at the back of the hospital.

Someone pressed coffee and falafel sandwiches into our hands. I couldn’t believe what was happening. After a few minutes, we fought our way back inside.

The crowds and patient numbers had become overwhelming: it was no longer possible to triage or organize people – they just piled in, filling every conceivable space: you could not move a meter without stepping over a patient.

“I cannot remember the face of a single patient I cared for, that day.”

It was impossible to work in any kind of systematic way – all you could do was try to do something for the patient nearest you, until another nurse, or a relative, called you to help them with something else.

Everyone was giving every bit of their energy. Hospital cleaners became nursing assistants, families did whatever they could. I remember clearly the moment when I knew it was really bad: in this deeply conservative place, cultural boundaries were suddenly forgotten – male colleagues reached into my pockets to take scissors or bandages, fathers grabbed my hands to pull me to where their son lay on the floor.

People became desperate, fights broke out. I tried to close my ears to the cries of patients as I wrestled with their broken legs: we didn’t have enough pain killers, and we had to stop the bleeding.

I remember a moment when I stood in the middle of the room, chaos swirling around me, and I thought, “I don’t know what to do!” … and, then, one of the nurses called my name, pulled me to another patient, pressed more packets of gauze into my hand, and we continued.

The hours flew past like that. Eventually, as supplies became critical, the flow of patients finally began to slow down. The security situation was deteriorating as emotions ran higher, and our management decided to pull us out.

I remember coming back to the office where many of our colleagues were waiting for us: I remember the concern on their faces when I couldn’t hold back the tears. I remember putting my scrubs, and my shoes, in a bucket of bleach when I arrived home. I remember standing alone in my kitchen, in the dark, trying to wrap my mind around what had just happened.

The one thing I don’t remember is faces. I cannot remember the face of a single patient I cared for, that day.

“I share something special with the nurses I worked with, that day.”

Once a man stopped me and told me he recognized me, that I took care of his father when he was lying on that crowded floor, bleeding. We saw almost 600 patients, that day.

There was a doctor on duty that I saw many patients with. I found out, later, that they had brought his brother in, during the afternoon. He died before they could find my colleague.

It’s nearly one year on, now, and we have all found a way to put that day behind us: tucked it away in a corner of our minds so that we can carry on with our jobs.

I share something special with the nurses I worked with that day – if I see them now for a training session, or in passing, we share a nod, a smile, a greeting.

We hold the memory of that day silently between us, for just a second, and then we move on. I left a tiny part of myself on the floor of that emergency room, that day, and I know that long after I have moved on from Gaza, that part of me will remain, remembering.

Sarah Collins is an emergency department nurse with the International Committee of the Red Cross (ICRC) in Gaza.

Human Interest 05/15/19 The Northern Jordan Valley: A Testimony to the Ongoing Nakba