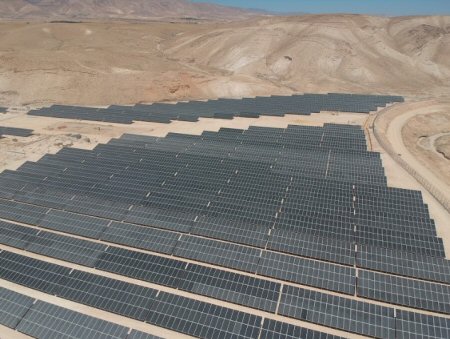 Noor Jericho Solar Park with its 20,000 panels is the first to start producing electricity in the Noor Palestine solar energy project. (Photo courtesy of PIF)

The Noor (light) Jericho Photovoltaic (PV) Solar Park, the largest so far solar park in Palestine built on a 100-dunum plot of land in the wilderness of Nuwimeh, Jericho, was established by Massader, a company of Palestine Investment Fund (PIF) at a cost of $10 million. It is only a fraction of the much larger Noor Palestine project, which when completed in eight years will produce 200 MW of electricity from solar energy, equivalent to 17 percent of Palestine’s power needs, said Mohammad Mustafa, PIF Chairman of the Board.

PIF established Massader to lead its investment portfolio in natural resources and infrastructure through leading a number of mega investment projects in traditional and renewable energy and industrial zones, including Noor Palestine solar program.

Investment in Noor Palestine solar program is expected to reach $200 million with a target capacity of 200 MW of electricity generated from solar energy in the next eight years.

The present program includes the establishment of three solar parks: Noor Jericho, the largest, and the much smaller Noor Tubas solar park with a capacity of 4 MW and Noor Jenin project with a capacity of 5 MW, as well as the installing of thousands of solar panels on the rooftops of 500 public schools throughout Palestine to generate 35 MW, the largest amount of power to be generated in this program.

The Ministry of Education gave Massader the right to use the rooftops of the public schools to build solar panels on them mainly due to shortage of open land in light of the Israeli military control over two thirds of the Palestinian land in the West Bank, referred to as Area C. Israel does not allow Palestinian construction or to benefit from the land in Area C. This has made it difficult for the PIF and Massader to find suitable lands for the thousands of solar panels that need to be installed on that land and as a result, vertical stations may be one alternative solution to this problem, said Mustafa.

Work on the Noor Jericho Solar Park started six months ago by local Palestinian contracting companies and supervised by the Jordan based E-RES, an energy advisory company. Work is expected to be completed in June. The power to be generated from its 20,000 solar panels installed in two stations – one 4000 panels and the other 3500 panels – will be distributed by the Jerusalem-based Palestinian electricity company, Jerusalem District Electricity Company (JDECO), which provides power to Jerusalem, Ramallah, Bethlehem and Jericho and their area villages and towns.

PIF signed an agreement with JDECO for the connection and distribution of the produced electricity through the JDECO power network.

However, the final beneficiaries of the power generated from the solar panels are going to be commercial and public service establishments within JDECO’s area of operation.

In the case of Noor Jericho supply, the 7.5 MW power has already been purchased by three Palestinian companies – the Istishari Hospital in the new Rihan suburb of Ramallah, and the Ramallah-based Birzeit Pharmaceutical Company and The National Bank.

According to Mustafa, the power generated from the solar parks is going to reduce Palestinian dependence on Israeli power, which provides Palestine with 98 percent of its power needs of 1000 MW annually.

The Noor Jericho Solar Park is expected to reduce the import of electricity by around $1.25 million annually, with an estimated total of $31 million during the 25 years expected lifetime of the park as the production of electricity will be enough to cover the consumption needs of 36000 homes annually.

This money, said Mustafa, will be invested in developing the alternative energy program, according to WAFA.

“The whole idea here is to diversify the sources of energy without doing away with the current sources, mainly diesel fuel, which so far remains a main source of energy in Palestine,” he said.

As Palestine moves toward diversification of its energy resources, it is expected to generate enough power in the future to meet most of its needs and to lower dependency on energy from foreign sources, at the same time lower the overall energy bill.