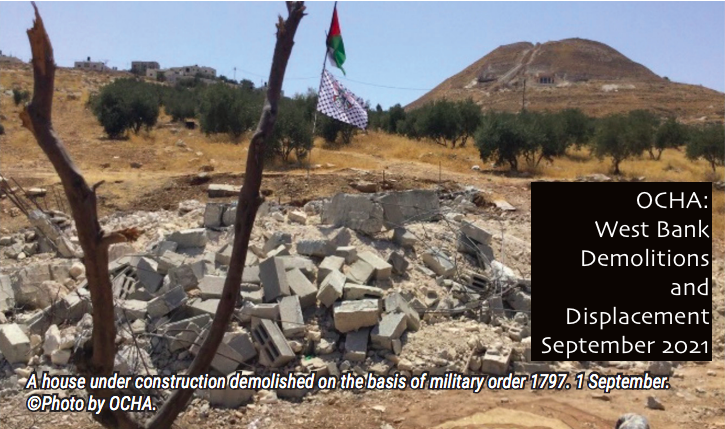 • September recorded the fewest monthly demolitions and displacement since June 2017.

• However, 21 % more structures were demolished or seized in the first nine months of 2021 compared with the equivalent period in 2020; 28 % more people were displaced.

In September, the Israeli authorities demolished, forced people to demolish, or seized 8 Palestinian-owned structures across the West Bank. This resulted in the displacement of 2 people, and affected the livelihoods or access to services of about 50 others. All the structures were targeted due to the lack of building permits, which are nearly impossible for Palestinians to obtain in Area C and East Jerusalem.

All the 5 structures in occupied East Jerusalem were demolished by their owners, including 2 home extensions from which an elderly woman and a girl were displaced. The total number of such demolitions carried out by the owners since the beginning of 2021 in East Jerusalem has reached 68.

No donated structure was demolished or seized in September. Nevertheless, the number of such assets demolished or confiscated has increased by almost 96 % so far in 2021 compared with the equivalent period in 2020 (from 94 to 184). A renewed warning was issued against an EU-funded school, which remains under threat of demolition by occupation authorities.

While no donated structures were demolished/seized in September in the context of Israel’s permit regime, some were destroyed during a mass settler attack in the Palestinian village of Umm Fagarah, Hebron, on 28 September. This incident resulted in the injury of nearly 30 Palestinians and extensive property damage, including damage to donated solar panels, a water network, and other WASH materials provided by the European Union (EU) or its member states.