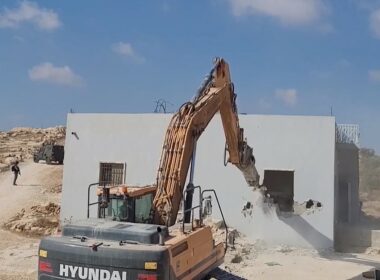 Israeli soldiers demolished, Wednesday, a Palestinian-owned home near Hebron, in the southern part of the occupied West Bank.

Fuad al-‘Amour, the coordinator of the Protection and Steadfastness Committees in Masafer Yatta and Southern Hebron Hills, said the soldiers, accompanied by several bulldozers, invaded the al-Jawaya community, east of Yatta, and demolished (Video by WAFA News) a 150 square/meter home, owned by Hussein Nawaj’a and his ten family members.

Rateb Jabour, the coordinator of the National and Popular Committees against the Annexation Wall & Colonies in southern Hebron, said the soldiers handed, in June of this year, demolition orders targeting three homes, a shed, an agricultural room, and four water wells in the al-Jawaya area, east of Yatta.

Jabour added that the soldiers constantly target the Palestinian communities in the area to force the residents out of their lands and expand the illegal Ma’on colony, built on stolen Palestinian lands, and stated that Israel continues to violate International Law by its actions, especially since the Palestinians have all official deeds proving ownership of their lands.

He called on various local, regional, and international human rights and legal groups to act to end the Israeli violations, and hold Israel accountable for its continued crimes.