Activists Call For US President to Sanction Israeli Defense Minister 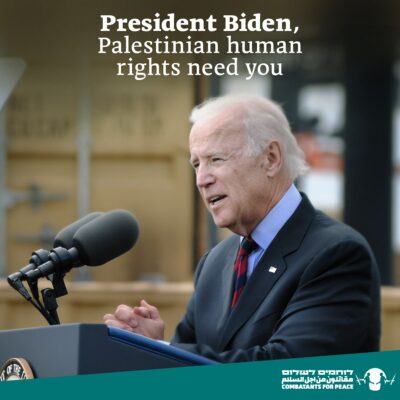 Combatants For Peace: This week, the Combatants For Peace Movement (CFP), issued a call for action through its social media platforms calling people to support an open letter to United States (US) president Joe Biden in an attempt to get the US government to impose personal sanctions on Israeli Defense Minister Benny Gantz.

The group says the campaign comes as a retaliation to Gantz’s decision last month “to sign orders labeling six of the most well-known and human rights organizations in Palestine as terrorist organizations” the group said on its Facebook page.

The sixth is the Palestinian chapter of the Geneva-based Defense for Children International organization.

The open letter, which can be found at this link was co-authored by Israeli lawyer, Eitay Mack, calls for imposing sanctions on Gantz under the Global Magnitsky Act of 2016.

The Global Magnitsky Act of 2016 authorizes the US government to impose sanctions on those it sees as human rights offenders, freeze their assets, and ban them from entering the US.

The group said in its statement ”this global list of human rights violators from countries such as Russia, Belarus, Venezuela, and China. By Gantz’s decision to sign orders incriminating six of the most well-known and central human rights organizations in Palestine as “terrorist organizations,” he earned his place on this horrific global list”

According to CFP, Gantz decided to label the six organizations as “terrorist groups” without presenting any proof or following a transparent procedure.

“It seems that the decision was based on research made by the right-wing organization NGO Monitor. In addition, Gantz has a personal interest in the matter; some of the six organizations have raised personal accusations against him personally in the International Criminal Court at The Hague accusing him of committing war crimes during the 2014 attack on Gaza” CFP said.

“It is clear to everyone that the six Palestinian organizations have been defined as terrorist organizations because they expose Israel’s actions to the public and because they do so successfully.” CFP added, “Despite all efforts to silence them, these organizations repeatedly expose the crimes committed by the Israeli army, police, Shin Bet (Israeli secret service), government and judicial officials, and the settlers.”