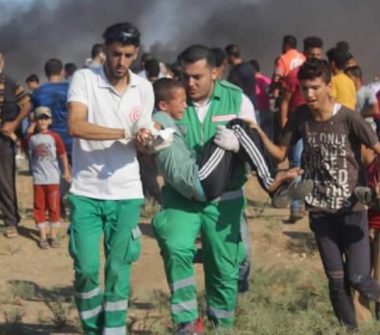 The Palestinian Health Ministry in the Gaza Strip has confirmed that Israeli soldiers killed, Friday, two Palestinians and injured 270 others, including 60 who were shot with live fire.

The Ministry said the soldiers killed Karim Abu Fatayer, 30, by shooting him with a live round in his head, east of the al-Boreij refugee camp, in central Gaza.

The Palestinian was shot in his eye, and the bullet exited through the back of his head after fracturing his skill and scattering his brain. The slain Palestinian is from Deir al-Balah, in central Gaza.

Furthermore, the soldiers killed Sa’adi ِAkram Abu Muammar, 26, east of Rafah, in the southern part of the Gaza Strip.

Sa’adi is a married father of two daughters, Rahaf, 5, and Aseel, 3, and his wife is seven months pregnant.

The Health Ministry also said the soldiers injured 270 Palestinians in several parts of the Gaza Strip, during the Great Return processions; 166 of them were treated in field clinics, and 104 were rushed to hospitals.

Among the wounded are 60 who were shot with live fire, including 19 children, in addition to nine medics, who were injured by shrapnel or suffered the effects of teargas inhalation.

The Health Ministry in Gaza said the latest Israeli assaults bring the number of slain Palestinians since March 30th, to 170, in addition to 18300 who were injured.

At least one Palestinian man was killed and 156 others injured, by live bullets or sustained suffocation from teargas inhalation, on Friday, as Israeli forces continued to crack down on the Great March of Return protests at Gaza-Israel border, according to the Ministry of Health.

The forces fired live bullets and rubber-coated steel rounds at the protesters who gathered at many encampments along the border, killing Karim Abul-Fatayer, 30, and injuring 156 other protesters, WAFA reported.

More than 169 Palestinians have been killed and 17,500 others injured since the outbreak of the Gaza border protests on March 30. The protests call for ending the 12-year-long Israeli blockade of Gaza and for the right of return of the refugees.

Most of the casualties occurred on May 14, when Israeli forces attacked Palestinian protesters marking the 70th anniversary of Israel’s occupation of historical Palestine and the ensuing ethnic cleansing of half a million Palestinian refugees.